Published 13 March 2017
As the global demand for chicken meat rises, a University of New England researcher reports that use of novel commercial enzymes may help lower feed costs for producers, improve meat quality, and h… 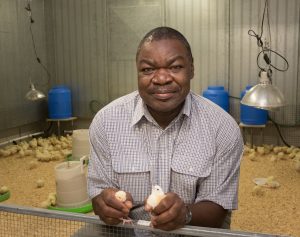 As the global demand for chicken meat rises, a University of New England researcher reports that use of novel commercial enzymes may help lower feed costs for producers, improve meat quality, and help lessen the poultry industry’s dependence on imported feedstuffs.

Soybean is the main source of protein for intensively-farmed poultry and other simple-stomach animals such as pigs, because it is rich in protein and has better amino acid profile than many other plant protein sources, but it must be heat-treated before being used.

UNE scientists have found that raw soybean meal could be safely included in poultry diets if supplemented with certain microbial enzymes. This option didn’t substantially increase the cost of the diets due to the saving on the other components of the diet.

A full commercial trial is scheduled to be conducted in a major chicken-producing region in Africa, where the poultry industry is growing rapidly and there is a need for increased supply of animal protein.

Professor Iji says feed costs account for close to 70% of variable costs, so that the financial success of a poultry business depends on how well nutrition is managed.

“One could almost say that poultry breeding is close to complete. But nutrition and health are the two most important aspects of management to achieve maximum production – though climate control, through housing, is also critical to production,” said Professor Iji.

More than 70% of soybeans in the world are produced in North and South America, Australia produces less than 0.5% of the worlds supply so is completely dependent on imports from America.

“The local poultry industry in Australia and other parts of the world are at the mercy of soybean producers in America, with fluctuation in production, supply and price. So poultry researchers and producers in Australia have been trying to find alternatives.”

For Australia, this may mean the test use of canola, cottonseed, lupins and peas. In other parts of the world, it may mean use of peanut, sunflower and similar products with high levels of protein.

The University of New England has been in the forefront of poultry nutrition over many decades. Poultry feeds are typically more complex than feed for other farm animals. The predominant feed ingredients are cereal grains, followed by oil seed meals or cakes, some animal by-products, mineral sources and synthetic amino acids.

The use of new enzymes may open up new possibilities for use of raw soybean meal in intensive farming in regions with moderate production of soybeans.

“The microbial enzyme industry is one that is growing rapidly, almost at the same pace as the poultry industry,” Prof. Iji said.

“Poultry productivity can be improved by the inclusion of specific microbial enzyme products in the diet. One particular enzyme, phytase, is now used in most poultry diets to release phosphorus from grain feed ingredients.”

Enzyme producers are increasingly improving the products, almost at the pace of the mobile phone industry. The producers rely on nutritionists to test the effectiveness of the products and recommend registration or improvement.

“Researchers at UNE have conducted several tests, including the one that we recently completed on raw soybeans, using enzymes produced and marketed by Royal DSM. The two and a half year PhD project by Mammo Erdaw focused on an enzyme targeting proteins, since it is well known that the toxic factors in raw soybeans are protein in nature. We determined the concentrations were much higher than in the processed soybean meal, so we decided that it would be unsafe to completely replace this with the raw meal. ”

Tests were also run in a tube (without animals) to see if our microbial enzymes would have any effects on the toxic factors in raw soybeans. The enzymes digested more of the protein and released more phosphorus than without the enzymes.

“The results encouraged us to start animal trials where we replaced the level of raw soybean at no more than 25% of commercial soybean meal, which was equivalent to about 8% of the diet. The animal trials examined a series of responses ranging from feed consumption to growth, internal organ development, how protein and energy were digested, release of amino acids from the diets, effects on nitrogen turnover, meat yield, leg bone strength and bone mineral content.” Overall, the enzymes improved growth and had no negative effects on the health of the birds.