“Town and gown” lend support to Opera in the Paddock

Published 28 February 2017
One of New England’s most significant cultural events, Opera in the Paddock, has formed alliances with the University of New England (UNE) and Armidale Regional Council (ARC) to spread the be… 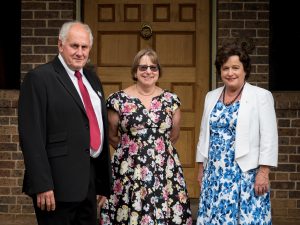 One of New England’s most significant cultural events, Opera in the Paddock, has formed alliances with the University of New England (UNE) and Armidale Regional Council (ARC) to spread the benefits of the event for the region.

UNE has become the principal sponsor of Opera North West (ONW) for its 2017 season of Opera in the Paddock. The university’s support extends to a special performance by the event’s cast in UNE’s Lazenby Hall. ARC has contributed $10,000.

Opera in the Paddock, conceived and largely powered by the energy of Delungra couple and ONW founders Peta and Bill Blyth, has for the past 14 years been a magnet for thousands of opera lovers, and those who just like a good open-air night out.

The 2017 version, the event’s fourteenth showing, will be held at two venues: at UNE’s Lazenby Hall on March 24, and “under the stars” at the Delungra farm “Mimosa” on March 25.

For town and gown, it is a home-grown project worth supporting.

“Opera in the Paddock brings international talent to the New England, and contributes to the understanding that the region has many faces and many talents,” said Trevor Goldstone, UNE’s Pro Vice-Chancellor, External Relations.

“An important part of UNE’s purpose is to contribute to the development of more prosperous, resilient regional communities. Opera North West has been working on that outcome for 14 years, and UNE is delighted to be able to support that effort.”

ARC Administrator, Ian Tiley, observed that the event draws a big crowd from ARC’s region, and not all of them are in the audience.

“Opera in the Paddock provides a rare opportunity for our local musicians to work in a world-class musical environment – and to remind the region that we have some world-class musicians working and teaching in our midst,” Dr Tiley said.

“ARC makes a big investment towards attracting tourists to the region. Opera North West and their many helpers do the work of regional promotion, and put on a major event, all for the love of music. That is something worth supporting.”

ONW’s Artistic Director Peta Blyth, said the partnerships will make an important contribution to the quality and future of Opera in the Paddock.

“Knowing that we have some of the costs covered allows us to concentrate on making the event run to its highest potential,” Mrs Blyth said.

“Support from UNE and ARC is vital to the project.”

“I’d like to convey our warmest thank-you to these organisations for supporting us, and to welcome everyone associated with them to come to our performances at UNE or Delungra. They will get to see a performance that would cost at least twice as much if they went to see it in a capital city.”

Mrs Blyth sang opera internationally before trading the stage for family and the Blyths’ Delungra farm, which has been owned by Bill Blyth’s family for 107 years.

Except that Mrs Blyth didn’t completely trade in the stage. Fourteen years ago, with the support of like-minded friends, the couple staged an “opera in the paddock” that quickly burgeoned into an annual event with an international cast of singers.

“Every year, after the event, I think ‘never again’,” Mrs Blyth said.

“But every year, after the exhaustion has worn off, I remember what fun it was to bring people together for music and song, and what fun it is to give people such enjoyment in your house paddock. And off we go again.”