Published 20 February 2017
Andrew Robson has completed a cycle of sorts by winning the 2016 Royal Society of New South Wales’s  Poggendorff Lecture Award, in recognition of his “significant contributions to agricultural rese… 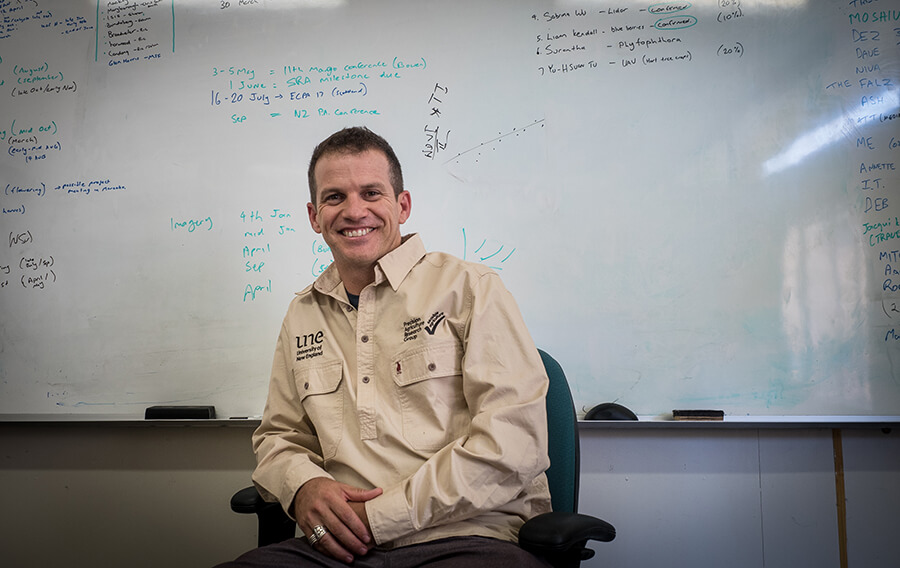 Andrew Robson has completed a cycle of sorts by winning the 2016 Royal Society of New South Wales’s  Poggendorff Lecture Award, in recognition of his “significant contributions to agricultural research, particularly in the use of remote sensing”.

The award was a bequest to the Royal Society by brilliant agricultural scientist Walter Poggendorf, who joined Yanco Rice Research Station at its inception in 1928 and made major contributions to the development of the Australian rice industry, and later, to tree crops and melons.

After working in the Riverina for a year picking oranges, he was employed by NSW Department of Primary Industries at Yanco for a two-week job washing out rice roots. The fortnight turned into six years (1996- 2002) of employment with the rice physiology department, during which he also completed an external Environmental Science degree at Charles Sturt University, majoring in remote sensing and Geographical Information Systems (GIS).

From Yanco he joined the Queensland Department of Primary Industries at the Kingaroy field station, where he completed his PhD through the University of Queensland, evaluating remote sensing technologies for the prediction of yield, maturity and aflatoxin in peanuts.

One project, funded by Sugar Research Australia, is automating the processing and delivery of imagery products (yield, crop vigour and foliar Nitrogen content) from more than 95 per cent of the total Australian crop – 80,000 individual sugar crops a year.

The Royal Society will present the ‘Poggendorff Lecture Award’ medal at a black-tie dinner in May, with A/Prof. Robson to deliver the lecture itself at a later date.

Other highlights from Andrew Robson’s career:

He joined the University of New England’s (UNE) Precision Agriculture Research group (PARG) in 2012 as a research scientist on a national project, funded by Meat and Livestock Australia (MLA), evaluating ground-based sensing for the accurate estimation of pasture biomass.

He also worked on a Sugar Research Australia (SRA) funded project developing yield forecasting models from remotely sensed imagery. He has developed a similar model for avocadoes in a project funded by Horticulture Innovation Australia and Avocado Australia.

In 2013, Robson put together a multidisciplinary team (4 universities, 2 government agencies, 3 industry groups, consultants and growers)  in a national horticulture project mapping the extent of all commercial avocado, mango and macadamia orchards across Australia, while evaluating a range of remote sensing and robotic platforms to assist the industries with improved on-farm management. The $7.2 million project is funded by the Federal governments ‘Rural Research and Development for Profit’ scheme and Horticulture Innovation Australia.