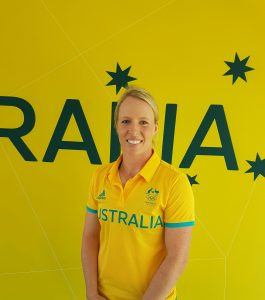 The University of New England is one of eight universities, and the only regional university in Australia, to be selected to participate in the inaugural competition following a competitive EOI process.

Ms Etheridge said she is excited to come on board with the UNE Lions for the new National University Sevens Series.

“My participation in this competition will give me the opportunity to pass on my knowledge to the next generation of aspiring Olympians,” Ms Etheridge said.

“I was born in Tamworth and lived in Coolah for the early part of my schooling with my parents still living in the region down near Walcha.  North West Sport played a massive part in my early sporting development and is one of the reasons I wanted to give back to the rural sporting landscape.”

“Having a team based out of rural NSW is a massive opportunity for many girls who have wanted the chance to play in a high level competition. It gives them the opportunity to receive high quality coaching, regular training and skill development. Some amazing athletes come from the country, it just takes them a little longer to be found and this will be a great platform.”

The UNE Lions have been busy since the ARU confirmed their inclusion in the competition, appointing former Queensland Rugby development staff member and UNE Centre Manager Mr Tom Bower as Head Coach. UNE’s Exercise Science Department has also come on board to head up the strength and conditioning program to ensure the team can grow in a professional high performance environment.

Mr Bower said they are very excited about this program and what it means for athletes in our region.

“To have a genuine national sevens team such as the UNE Lions is so important for the growth and development of the game in regional NSW,” said Mr Bower.

“We are providing our regional athletes with an environment that prepares them for top line rugby sevens. On top of this, we will also welcome Australia Pearls players into our squad. It is a fantastic opportunity for UNE to compete in the highest women’s rugby national competition.”

When asked about Ms Etheridge, Mr Bower said “Gemma has a real passion for this region and the athletes that come from it. It will be a once in a lifetime opportunity for our girls to learn from a rugby sevens gold medallist.”

Further information on UNE Lions trials, training and competition dates will be made available in the coming weeks.