Published 31 January 2017
Those Scandinavians and their ice bathing are onto something. Jumping into cold water after a Rugby Sevens match suppresses the onset of player fatigue, new research by the University of New Englan… 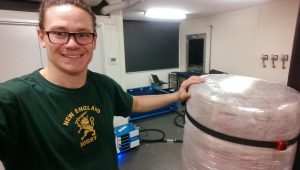 Those Scandinavians and their ice bathing are onto something. Jumping into cold water after a Rugby Sevens match suppresses the onset of player fatigue, new research by the University of New England has found.

Ph.D. Candidate Nicola Furlan from the School of Science and Technology says the study looked at the acute effects of cold-water immersion (CWI) on players during a fully scheduled day of Rugby Sevens.

“The benefits of CWI are mostly related to player welfare rather than performance, as there were no lessening of sprint performance between matches with or without CWI,” said Mr Furlan.

Rugby Sevens is a field-based team sport played in repeated short and intense matches in a tournament fashion. Researchers simulated a day of Rugby Sevens through a specific drill based on the running and contact activities of the Australian national team, which were monitored during a season of the World Rugby Sevens Series.

“We chose this particular sporting event because injury risk increases proportionally with the number of matches played within a tournament, which suggests the presence of cumulative fatigue.”

“Cold-water immersion is currently used in elite events because of evidence for its effectiveness has been reported in other football codes. However, the short amount of time between Rugby Sevens matches might not allow core- and muscle-temperature to return to an optimal range for performance.”

“We aimed to build a comprehensive understanding of the development of performance, physiological and perceptual fatigue and to establish the effects of CWI, to inform best practice.”

Practitioners are now being encouraged to use CWI as early as after the first match of the day because of its beneficial effects on physiological and perceptual measurements of stress, fatigue and muscle pain.

“The use of repeated CWI also reduced the loss of flexibility and eccentric strength observed at the end of the congested schedule, probably due to a reduced perception of muscle pain. We see this as a positive outcome, with the potential to reduce injury risk and improve player comfort”.

The project recently won the Student Research Award as best poster presentation at the 2016 ASCA International Conference of Applied Strength and Conditioning.