Published 31 October 2016
The University of New England has been awarded $2.6 million in the latest round of Australian Research Council (ARC) funding. UNE’s Vice-Chancellor, Professor Annabelle Duncan, said the results ref… The University of New England has been awarded $2.6 million in the latest round of Australian Research Council (ARC) funding.

UNE’s Vice-Chancellor, Professor Annabelle Duncan, said the results reflected the breadth and quality of research being done at the University. “ARC research funds are fiercely contested by researchers nationwide. When eight UNE researchers win significant grants in the best overall result for our University for more than a decade, it points to the excellence of the people we have on campus.” 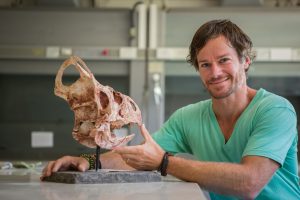 Particularly exciting for UNE is that four of these awards are going to individual researchers who now have the opportunity to research full time on projects that have been recognised as having critical national significance.

Dr Sang Hong Lee, an outstanding researcher from the School of Environmental and Rural Science, has been awarded a four-year $719,313 Future Fellowship to develop genome-wide models to better predict genetic effects depending on background and environment and to understand the value of heterogeneous information sources in genomic prediction.

The Future Fellowship award is designed to support the world’s best mid-career researchers undertaking their research in Australia and Dr Lee’s project allows him to pursue an innovative project that tackles important biological questions that can be readily applied to industry, most significantly here, to livestock breeding programs.

Dr Bell is researching dinosaur evolution in Australia and his project will answer controversial questions about the identity and biogeographic significance of taxa in this region of Gondwana and resolve uncertainty about Australia’s role in the evolution of the world’s fascinating radiation of dinosaurs.

Dr Bell will be using his $353,705 ARC grant to apply new analysis techniques to an exciting but under-utilised fossil resource from Lightening Ridge.

With her $372,000 grant, Dr Rader will undertake the first comprehensive study investigating the extent to which pollinator effectiveness drives the agro-ecological pollination process nationally and globally.

Dr Rader’s project will identify the factors influencing the variation in fruit quantity and quality in a model pollinator-dependent crop with the aim of building knowledge to support Australian production.

Dr Zhou, who received $330,324, will be working on the mathematical challenge of nonlinear free boundary problems, the results of which can contribute to better understanding of matters such as the spread of invasive species and flows through porous material.

An ARC Discovery Project grant of $495,068 was awarded to a strong UNE team led by archaeologist Professor Martin Gibbs who will work alongside UNE historian, Associate Professor David Roberts, and researchers from the Universities of Tasmania and Liverpool, in close collaboration with the Port Arthur Historic Site Management Authority.

The team will look at convict labour management and control, and the systems of production in which they were engaged and how these shaped both the landscapes of the Tasman Peninsular and the convict experience.

They will work with researchers from the National Taiwan University and University of Sydney, to investigate non-linear elliptic partial differential equations in well-established models in applied sciences.