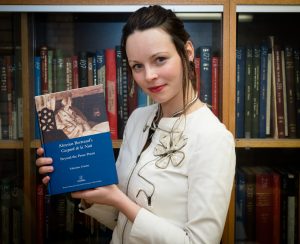 “Minor” authors provide backstreet access into histories that tend to be written by the prominent,  a new book by School of Arts French lecturer Dr Valentina Gosetti argues.

The work proposes a reassessment of Bertrand’s short compositions in prose—the inspiration for a Ravel piano work of the same name—and of the young poet himself. Most of the commentary on Bertrand’s 1842 work contrasts his dark Paris against the monumental reconstruction of the city by Georges-Eugene Haussmann that began a decade later.

Dr Gosetti, who believes that “there is no such thing as a minor author”, resets Bertrand in his context, where she finds him engaged in creating a mythology around the old city.

“He describes an ‘old Paris’ that maybe didn’t really exist, but is a Paris that is a repository of dark emotions. It challenges the notion that rationality is the only way of interpreting reality.”