Bees have lateralised brains once thought only present in humans

Published 06 September 2016
The social demands of the invertebrate species is vital in the evolution and development of a lateralised brain function, once thought to be a unique characteristic of the human brain, according to… 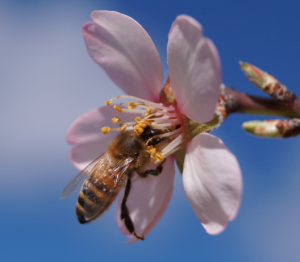 The social demands of the invertebrate species is vital in the evolution and development of a lateralised brain function, once thought to be a unique characteristic of the human brain, according to research by the University of New England’s Emeritus Professor Lesley Rogers.

A lateralised brain carries out different types of processing on the left and right sides and has recently been found in the brains of invertebrate species such as the honeybee.

Professor Rogers from the School of Science and Technology says they tested the very social Honeybee as well as the solitary Mason bee.

“In social bees, for example, each antenna has a different function in feeding and in social behaviour. Honeybees use their right antenna to recall short-term memories of particular odours associated with a reward of sugar. The left antenna allows them to recall only long-term memories.”

During social interactions between pairs of honeybees the researchers found that hive mates recognised each other when the bees used their right antennae but not when they used their left.

“The use of the left antennae leads to aggression between members of the same hive. So we therefore hypothesised that lateralisation of brain function in the same direction for most members of a species may have evolved only in social species.”

Then the researchers looked at the ‘solitary’ Mason bee, which has limited social interaction. When feeding, which they do alone, Mason bees do not show the population lateralisation characteristic of social bees.

“We decided to test social interactions in pairs of Mason bees. In pairs of males or females with only their left antennae in use, aggressive behaviour was elevated, and more so in females than males. Pairs using their right antennae, or both antennae, did not have any elevated aggression. Hence, lateralisation in the same direction in all or most members of a species is present for social behaviour but not for behaviour which is performed alone.”

The paper Lateralised antennal control of aggression and sex differences in red mason bees, Osmia bicornis has been published in the Nature Journal. http://www.nature.com/articles/srep29411