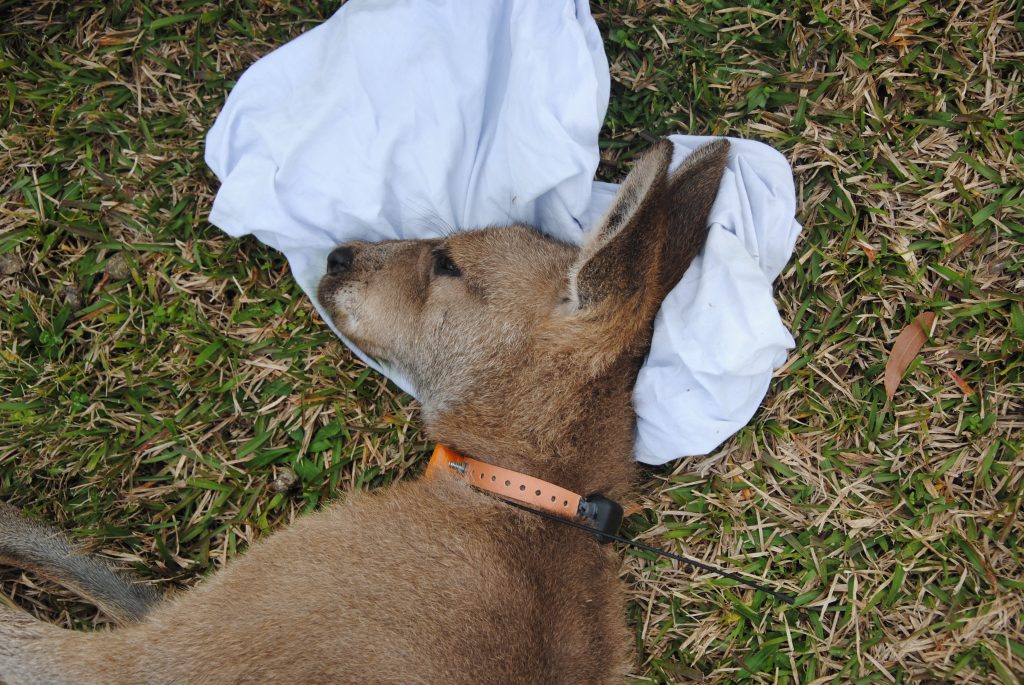 Male kangaroos in the Coffs Harbour area are being fitted with tracking devices to monitor their movement patterns in peri-urban areas to better manage their interactions with residents as part of a University of New England honours thesis project.

Zoology student in the School of Environmental and Rural Science, Tim Henderson, has been darting and collaring male kangaroos within Heritage Park north of Coffs Harbour since early June.

“There has been 14 attacks on people in the Heritage Park area over the years and we are hoping this data will be used to help put in place suitable management strategies to prevent future incidents,” Mr Henderson said.

The teams are collecting short and longer-term data using glue-on GPS tracking devices that will fall off after two weeks and GPS collars with radio transmitters that will be recovered in two months time.

The information gathered from the tracking devices will be used to help understand the movement ecology of kangaroos in Heritage Park to facilitate safe living between humans and kangaroos in peri-urban areas with frequent kangaroo activity.

Mr Henderson, who is currently working on his honours thesis under supervision of Associate Professor Karl Vernes and Dr Raj Rajaratnam, has already surveyed people’s views on kangaroos.

“I have already gathered data on kangaroo numbers and learning more about their movement habits is the final component of my thesis.

All information gathered will be factored into proposed management plans.

“By identifying patterns we can work with home-owners to be more careful and prepared.”

The project is joint venture between the National Parks and Wildlife Service; the University of New England; Wildlife Information, Rescue and Education Service (WIRES); Coffs Harbour Council and community representatives.