Published 08 June 2016
A University of New England stone tool analyst is part of a team that has identified an ancestor of Homo floresiensis, otherwise known as the ‘hobbit,’ on the island of Flores in Indonesia. A UNE-l… A University of New England stone tool analyst is part of a team that has identified an ancestor of Homo floresiensis, otherwise known as the ‘hobbit,’ on the island of Flores in Indonesia.

A UNE-led research team first discovered these diminutive extinct human cousins, who are about the size of a modern five-year old, in 2003. Dr Mark Moore from the UNE School of Humanities says a mandible fragment and six isolated teeth, belonging to at least three individuals, were recently discovered in deposits dating back 700,000 years ago.

The fossils were found next to stone tools in layers of sandstone at the site of Mata Menge, in the So’a Basin of central Flores.

“Analysis of these new fossils from Mata Menge supports the hypothesis that Homo floresiensis evolved from a population of large-bodied Homo erectus that were stranded on the island and subjected to the ‘Island Rule’. This is where selective pressures unique to islands cause large-bodied animal species to become smaller over time,” says Dr Moore. 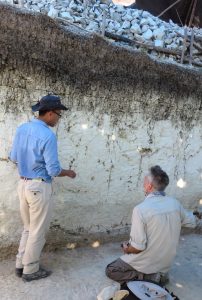 Researchers now have evidence that the founding population of Homo erectus shrunk to Hobbit size and evolved in to the new species, Homo floresiensis within 300,000 years of arriving on Flores.

Dr Moore’s understanding of the stone tools from Mata Menge is informed by his own skills as a flint knapper, developed over decades of practice.

“Making stone tools isn’t as easy as it sounds. Controlling the process requires complex mental evaluations of geometrical configurations on the stone, and blows that are simultaneously controlled and forceful.”

The hominins were small, but powerful. Much of the stone they flaked was coarse-grained volcanic rocks, but they had an eye for easier material, and frequently collected small, high quality flint-like pebbles during their stone forays.

“We found stone tools in direct association with the new fossils. The toolkits themselves were simple, comprising knife-like flakes for various cutting tasks, and the stout-edged cobble cores they were struck from—which were suitable as heavy chopping tools. The edges of the flakes were sometimes trimmed, perhaps to resharpen them or modify their shape.” 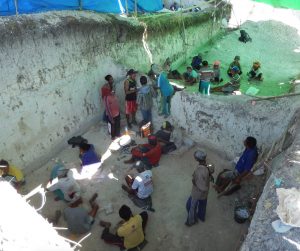 The Homo floresiensis story began when a population of Homo erectus became stranded on the island of Flores about 1-million years ago.

“Homo erectus left behind familiar mainland Asian plants and animals to confront an exotic and unaccustomed mix of species on Flores.”

Dr Moore found that the Flores hominins continued to make simple stone tools to survive but the tools didn’t buffer them from the extremes of selective pressures encountered on the island.

“Their skeletal anatomy and body shape morphed and their cranial capacity dramatically decreased. A technological adaptation didn’t seem to shelter them from the evolutionary process of island endemism. So maybe technology isn’t always the buffer against natural selection that we intuitively think it is—with implications for us more generally.”

The paper is published in the prestigious journal Nature. http://nature.com/articles/doi:10.1038/nature17663