Published 01 June 2016
Eminent medieval historian, Professor Thomas A. Fudge, of the University of New England School of Humanities, has published his ninth book on the early forms of heresy in Europe 600 years ago. His … 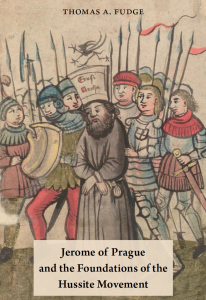 Eminent medieval historian, Professor Thomas A. Fudge, of the University of New England School of Humanities, has published his ninth book on the early forms of heresy in Europe 600 years ago.

His latest publication is based on the figure of Jerome of Prague, a highly educated and worldly radical who, a century before Martin Luther, openly questioned the authority of the Catholic Church.

Jerome travelled widely, engaging in philosophical discourse which he attempted to use as a mechanism to stimulate social and religious reform, which he argued superseded the rulings of the Roman Catholic Church.

Jerome was a principal follower of Jan Hus, a national Czech revolutionary and the primary subject of Prof Fudge’s earlier books, including Jan Hus: Religious Reform and Social Revolution in Bohemia, The Trial of Jan Hus and The Memory and Motivation of Jan Hus.

“The priest Hus was not as well suited to lead a popular revolution as was the wandering scholar Jerome,” Prof Fudge said.

“The latter was an individual of enormous intellect and reckless daring, who has been described by those who knew him at the height of his powers as a large man with a big, bushy black beard, whose oratory commanded the attention of all the sage men of European Christendom.

“It was he, obscured by the glory ascribed to Hus, who was the face and the force of the radical Hussite history.”

Both Jan Hus and Jerome of Prague were tried by the Council of Constance (1414-1418), found guilty of heresy and burnt at the stake. Their deaths, 11 months apart, sparked what is today known as the Hussite Wars, signifying some of the earliest sustained uprisings against the Church’s authority.

Despite their significance in the Church’s history, until now they have not been well recognised in western literature. Prof Fudge’s recent publication brings a new, historiographical insight into the stories of the popular Czech figures.

”Jerome of Prague was a man worthy of being remembered forever.”

Jerome of Prague and the Foundations of the Hussite Movement was published 1 June by Oxford University Press.