Published 26 May 2016
The University of New England’s Professor John Paterson has been presented with the 2016 Anton Hales Medal by the Australian Academy of Science (AAS). Prof Paterson, an Australian Research Council … 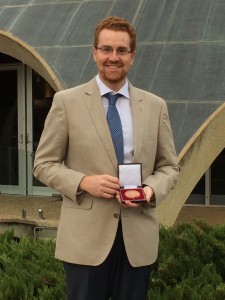 The University of New England’s Professor John Paterson has been presented with the 2016 Anton Hales Medal by the Australian Academy of Science (AAS).

Prof Paterson, an Australian Research Council Future Fellow, is a leading researcher on the earliest animals in the fossil record.

He uses exceptionally preserved Australian fossils to answer major questions relating to the evolution and ecology of half a billion year old marine fauna.

After the ceremony, Prof Paterson said that he was extremely honoured and grateful for the recognition.

“I’d particularly like to acknowledge those who have collaborated and supported me in my research career. I have been incredibly fortunate to be surrounded by a number of world-class researchers,” Prof Paterson said.

Prof Paterson is founder and director of UNE’s Palaeoscience Research Centre, one of Australia’s largest and most active research groups of its kind.

“Receiving the Anton Hales Medal highlights the global significance of Australian fossils, the evolutionary stories they tell, and the need to conserve this part of the country’s natural heritage,” Prof Paterson added.

The Anton Hales Medal is named after the founder of the Research School of Earth Sciences at the Australian National University, recognising distinguished research in the Earth Sciences.

The award was formally presented at the Academy’s annual three-day celebration of Australian science in Canberra.