Published 18 May 2016
Schools damaged and destroyed by fire rely on school leadership and resilience to rebuild, a study by the University of New England has found. Dr Adele Nye from the School of Education said the res… 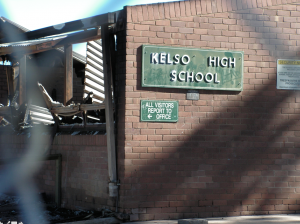 Schools damaged and destroyed by fire rely on school leadership and resilience to rebuild, a study by the University of New England has found.

Dr Adele Nye from the School of Education said the research project came about when hearing of the huge amount of unseen work that goes into rebuilding schools after fire from a teacher.

“I have been interviewing principals and executive staff at three NSW schools that suffered major fires. I have been impressed by the leadership approach of the two principals, despite the calamitous nature of these fires, they got on with the job.”

There have been more than 1400 significant school fires in New South Wales since 2000.

Dr Nye said there has been no qualitative research done on the school community and the legacy of the fires. The study looked at two rural and two urban schools in NSW and the ACT.

She said the analysis shows that leadership qualities, the resilience and strength of the community and their collective willingness to engage has helped them successfully rebuild after a fire.

The Kelso High School in central NSW was almost entirely destroyed by fire in 2005.

“I got a phone call during that night saying the school was on fire and I walked outside and I looked into the distance and all I could see was this big ball of flames,” said former Principal Paul Sterling.

He later recalled in a media interview how he had to work out of his car, as students and staff were scattered across five different locations. The fire destroyed all administrative records and materials.

Dr Nye said, “It was his adaptation, innovation and an open mind that helped that community rebuild and recover after the fire.”

Oxley High School in Tamworth was also studied after a fire destroyed a quarter of the schools buildings including the library, science and classrooms costing more than $10-million in repairs.

She said the interviews indicate that in the aftermath of any major school fire, the local community immediately looks to school leadership and management for guidance.

One staff member told Dr Nye about the loss of teaching resources,

“They were gone. Kaput. You know. And that had an impact on those particular people. You spend years and years and years gathering stuff together and all of a sudden it is gone. There is a sort of sinking feeling.”

Quality leadership was essential in bringing the school community together and which became recovery folklore.

The research ‘Working from the boot of a red falcon’: The impact of major fires in four Australian schools, is published in the Australian & International Journal of Rural Education.