Published 01 May 2016
Scientists at the University of New England are looking into how effective alpacas are in protecting livestock from predators. Dr Wendy Brown from the School of Environmental and Rural Sciences say… 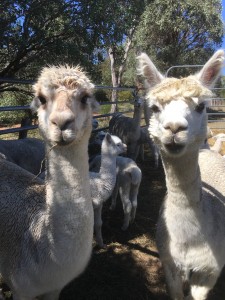 Scientists at the University of New England are looking into how effective alpacas are in protecting livestock from predators.

Dr Wendy Brown from the School of Environmental and Rural Sciences says alpacas are gaining in popularity as a guard animal.

“Many sheep producers report decreased lamb losses after introducing guardian alpacas to their flocks. However, there has been very little research into understanding what factors contribute to a successful guardian animal and what behaviours the alpaca exhibits in response to a predatory threat.”

As part of her honours project, UNE honours student Paige Matthews is using a toy dog and witches hat to find out how the alpacas respond to the novel objects.

“We found that Alpacas have a rich repertoire of social behaviours, including an interesting array of vocalisations and pronounced ear-movements, making them very interesting animals to study,” said Dr Brown.

“They give off a very high pitch and loud alarm call if something has disturbed them or there is something they suspect is a predator. In courtship they make a googling call, the sounds are quite different to what is found in other animals.”

There is also little known about whether males or females make better guardian animals.

“Our study promises to break new ground, as we will compare responses in males and females as well as young and old animals. So far, we have seen some clear differences in the responses but we have only just started analysing the data.”

Dr Brown said the next phase of the research will investigate the movements and behavioural responses of alpacas positioned within sheep flocks.

Armidale Alpaca farmers, David and Bronwyn Mitchell are providing researchers with valuable insights into alpaca behaviours as well as providing their animals as participants for the research.