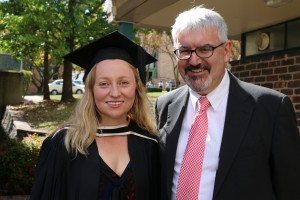 Originally from Sydney, Ms Gould began her career as a journalist before becoming intrigued by psychology.

“The human brain is a fascinating frontier for me, and I love learning more about what drives our behaviours and our differences. I am also strongly motivated to help people live more enjoyable and fulfilling lives, and I think psychology offers some great tools to do that,” Ms Gould said.

One annual APS prize is offered at each higher education institution with an accredited award in Psychology.

“I was blown away by the dedication and talent of the other fourth-year students,” Ms Gould said.

“They’re an amazingly diverse group who brought a huge range of life experiences to their future careers in psychology. For that reason I was extremely surprised and honoured to be awarded the APS prize.

“My psychology degree was a labour of love across several years and two continents, and to have that work acknowledged like this is very moving.”

Ms Gould was nominated for the award by Head of School of Behavioural, Cognitive and Social Sciences, Professor Lewis Bizo.

“Karen was an extraordinary and incredibly resourceful student and was nominated due to her exceptional performance throughout her Honours year,” Prof Bizo said.

Ms Gould’s honours project investigated the genetic and environmental contributions to ADHD symptoms, using data from a large twin study at UNE called The Australian Twin-Study of the NAPLAN.

She is now studying a Masters by Research in Psychology at Macquarie University and hopes to enrol in a Clinical Masters in the future.

The prize includes 12 months complimentary APS membership and an invitation to present a poster at the inaugural APS Congress to be held in Melbourne in September 2016.