Published 17 April 2016
New research on how echidnas survive bushfires published in the prestigious journal, Proceedings of the Royal Society B.

Echidnas can survive bushfires by staying hidden and sheltered and going into torpor, according to new research by the University of New England published in the latest issue of the prestigious journal Proceedings of the Royal Society B. 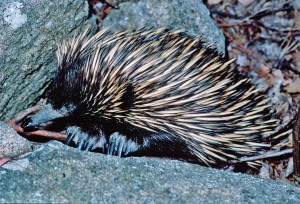 Dr. Julia Nowack and Professor Fritz Geiser from Zoology in the School of Environmental and Rural Science were part of a research team that can now explain why echidnas are so successful in general and specifically at withstanding periods of bushfires.

“Echidnas reduced their activity as a direct response to fires and expressed more and longer phases of multiday torpor (hibernation) after the fire to compensate for reduced foraging opportunities.”

Ten echidnas were implanted with temperature data loggers that recorded body temperature. GPS units were glued to the spines of their lower back to record their location and external transmitters were used to find echidnas.

Prof Geiser said the echidnas were observed during a prescribed burn at Dryandra Woodland, southeast of Perth, Western Australia.

“Four of five echidnas at the fire site survived the burn. The individual that died during the burn was resting inside a log that caught fire and did not reach a normal body temperature before it died. A second individual resting in the same log aroused from torpor and left the log during the fire.”

The study showed that the echidnas not only reduced activity immediately after the burn but for at least three weeks after the event and were able to do so because they conserved energy using torpor.

“This shows the echidna’s ability to match energy use to resource availability. After a fire, food availability decreases and exposure to predators increases. It is believed that prolonged inactivity and torpor most likely helped early mammals to survive beyond the K-Pg extinction, which wiped out three quarters of the plant and animal species, including the dinosaurs, on Earth,” said Prof Geiser.

The researchers say the study has implications for the predicted global warming.

“We expect the intensity and frequency of natural disasters to increase around the world so it is important that we can predict the behavioural and physiological responses of animals to fire and other natural disasters.”