Published 16 March 2016
The Armidale School (TAS) has won the Highlands Science and Engineering Challenge after fierce competition between 220 high school students at the University of New England this week. On Tuesday, m… The Armidale School (TAS) has won the Highlands Science and Engineering Challenge after fierce competition between 220 high school students at the University of New England this week. 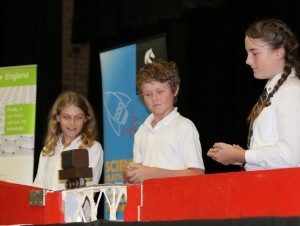 Will Rowdawson, Jean Boshoff and Madison Sim and the Bridge Buster ingot

“We had a lot of fun today. My team and I had to build a bridge and a catapult. I learned about science but also about working together in a team to solve problems,” Jean Boshoff from Ben Venue School said.

The students had to solve different problems such as testing the weight bearing capabilities of a bridge built from straws and rubber bands and building fast, manoeuvrable hovercraft.

TAS will now have the opportunity to represent the region at the national championships.

Organiser, Dr Peter Lye said the Challenge encourages students to get involved in science and technology in the classroom.

“We’d like to see the engagement that these students have experienced at UNE motivate them to select higher-level maths and science as electives and maintain that interest through to university level.”

“We believe the event is stimulating students’ interest in STEM subjects; only recently we had a first year student saying to us this competition is the reason why she decided to study science.”

The Science and Engineering Challenge is a national outreach initiative of the University of Newcastle. It is run by the School of Science & Technology and Environmental & Rural Science in conjunction with Armidale Central Rotary club.

• Walcha with their Mars buggy;
• The Uralla /Guyra combined team with both Electropolis and String-along;
• St Mary’s with Earthquake;
• Ben Venue with Get a grip; and
• Armidale City with Get over it (Bridge)