Early human ancestor didn’t have the jaws of a nutcracker, study finds

Published 08 February 2016
Research published in 2012 garnered international attention by suggesting that a possible early human ancestor had lived on hard foods including tree bark, fruit, leaves and other plant products. 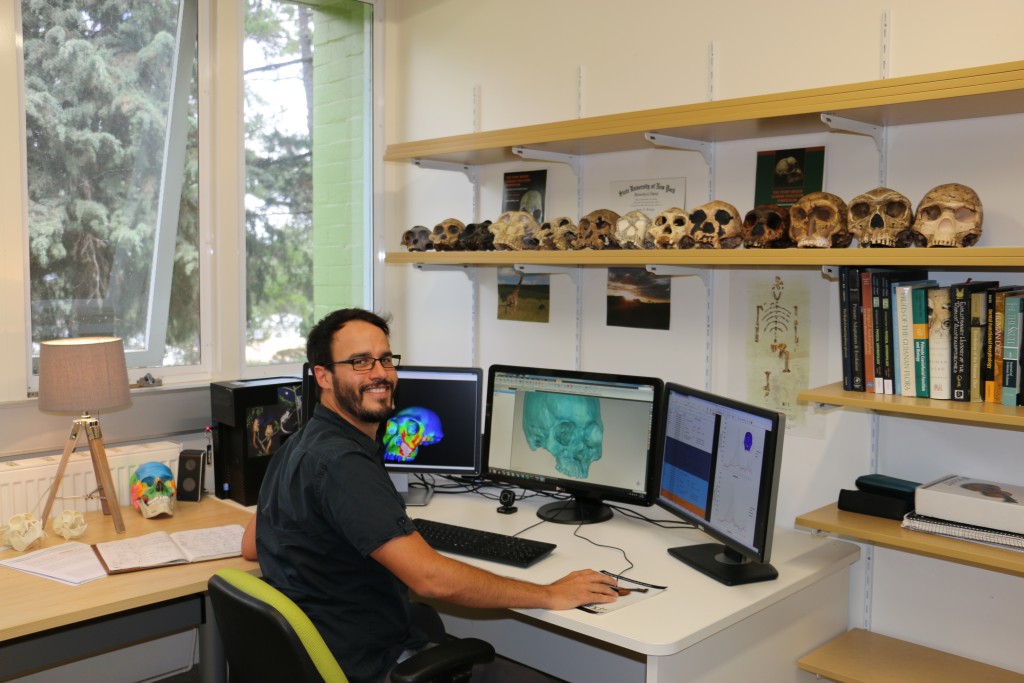 The fossilized skull of Australopithecus sediba specimen MH1 and a finite element model of its cranium depicting strains experienced during a simulated bite on its premolars. “Warm” colours indicate regions of high strain, “cool” colours indicate regions of low strain. Image of MH1 by Brett Eloff provided courtesy of Lee Berger and the University of the Witwatersrand.

Research published in 2012 garnered international attention by suggesting that a possible early human ancestor had lived on hard foods including tree bark, fruit, leaves and other plant products.

But new work by an international team of researchers now shows that the Australopithecus sediba, a diminutive pre-human species that lived two million years ago in southern Africa, didn’t have the jaw and tooth structure necessary to exist on a steady diet of hard foods.

Most australopiths had amazing adaptations in their jaws, teeth and faces that allowed them to process foods that were difficult to chew or crack open.

“Unlike other australopiths, we find that A. sediba had an important limitation on its ability to bite powerfully; if it had bitten as hard as possible on its molar teeth using the full force of its chewing muscles, it would have dislocated its jaw,” said Dr Justin Ledogar, lead author and researcher in the School of Environmental & Rural Science at the University of New England.

Australopithecus sediba has been heralded as a possible ancestor or close relative of Homo, the group to which our species belongs. The new study does not directly address whether A. sediba is indeed a close evolutionary relative of early Homo, but it does provide further evidence that dietary changes were shaping the evolutionary paths of early humans.

“Modern humans also have this limitation on biting forcefully and we suspect that early Homo had it as well, yet the other australopiths that we have examined are not nearly as limited in this regard,” Ledogar said. “This means that whereas some australopith populations were evolving adaptations to maximize their ability to bite powerfully, others (including A. sediba) were evolving in opposite directions, with one lineage leading to our genus.”

The study, published in the journal Nature Communications, describes biomechanical testing of a computer-based model of an Australopithecus sediba skull, based on a fossil skull discovered eight years ago in South Africa.