Evidence of over 100,000 year old humans found on Sulawesi

Published 18 January 2016
Research published in this week’s Nature on stone tools found in Sulawesi, Indonesia, which date to at least 118,000 years ago, suggests that early hominins colonised the island much earlier than p…

Research published in this week’s Nature on stone tools found in Sulawesi, Indonesia, which date to at least 118,000 years ago, suggests that early hominins colonised the island much earlier than previously thought. 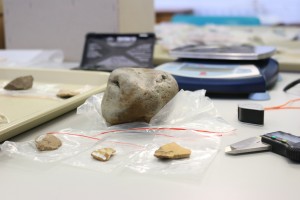 The stone artefacts found in Sulawesi

Sulawesi, the largest and oldest of a group of islands separating continental Asia from Sahul, is thought to have had a key role in hominin migration, and prior research has shown that modern humans were living on the island as early as 40,000 years ago.

But an international team researching in Sulawesi has discovered older evidence dating to 118,000 to 194,000 years in age, and suggesting that the island may have been initially inhabited by an archaic human species.

According to co-researcher, Dr Mark Moore, from the University of New England, who analysed the stone tools recovered from the excavation, the tools were finely crafted with a high degree of skill involved.

“The Sulawesi hominins had a clear understanding of the essentials of fracture mechanics, and were skilled at striking flakes consistently and repetitively from cores”, Dr Moore said. 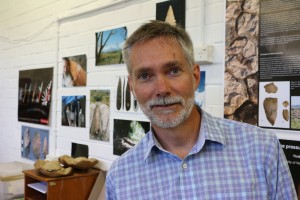 The absence of Pleistocene human fossils on the island means that the identity of the tool-makers — and which hominin species was the first to arrive at Sulawesi — remains unknown.

“A recurring theme in palaeoanthropology in the last decade is that the hominin family tree is vastly richer and more complex than once thought, and our Flores—and now Sulawesi—research shows that certain hominins demonstrated a precocious ability to island-hop.  We have two hominin species in Indonesia—Homo erectus on (at the time) the Asian continent of modern Java, and Homo floresiensis on Flores—with tantalising evidence for additional hominin species elsewhere in Asia.  Sulawesi is another hominin-occupied island, although the species there is as yet unidentified,” Dr Moore explained.

The authors suggest that other islands in the region may also contain undiscovered records of early humans, which could help to fill in some of the gaps in our knowledge of ancient hominin diversity in the region.