Published 14 September 2015
Two students from the University of New England will advance their leadership skills at the National Student Leadership Forum in Canberra from 17 to 20 September 2015. Every year UNE nominates youn…

Two students from the University of New England will advance their leadership skills at the National Student Leadership Forum in Canberra from 17 to 20 September 2015.

Every year UNE nominates young people, between the ages of 18 and 26, who show strong leadership potential to apply to attend the forum.

Vice-Chancellor’s Scholars Bryce Clarke and Jessica Lewis were nominated and successfully submitted applications to attend the four-day conference that brings together today’s leaders and the leaders of tomorrow in a discussion on values and believes. 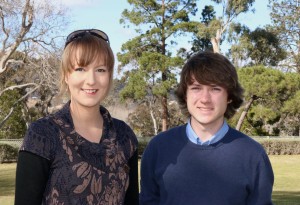 Science student and college mathematics mentor Bryce was elated to hear his application was successful.

“I feel very honoured and grateful, as well as really excited as the forum presents a wonderful opportunity to connect students from all across Australia and to listen to some of the country’s most prominent leaders. I am hoping that I will come back from the forum with more perspectives on leadership that I can carry through to my own life,” Bryce said.

“I’m very excited to be attending the forum later this month, and look forward to meeting many people from diverse backgrounds to discuss the focus of the forum, which is faith and values as foundations for effective leadership,” Jessica said.