Published 09 September 2015
Students of the University of New England’s (UNE’s) Pharmacy degree have achieved outstanding success since its inception in 2010. The awards received by UNE’s Pharmacy students at recent ceremonie… 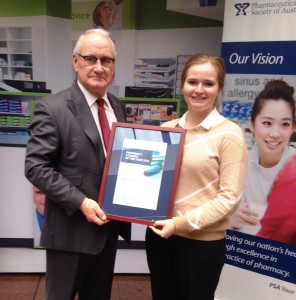 Students of the University of New England’s (UNE’s) Pharmacy degree have achieved outstanding success since its inception in 2010.

The awards received by UNE’s Pharmacy students at recent ceremonies illustrate the effectiveness of the program’s strong focus on integrated learning and patient-centred care.

Laura Norman, one of the first UNE Pharmacy graduates was recently named National Intern of the Year for 2015 – a prestigious, competitive annual prize judged by the Pharmaceutical Society of Australia.

Callan Beesley and Brighid Carey were named NSW Pharmacy Student of the Year in 2013 and 2015 respectively; a competitive award that evaluates the critical thinking and counselling skills of final year students representing each of the Pharmacy programs in the state. Additionally, UNE students secured almost a quarter of all the Pharmacy Guild of Australia’s Rural Scholarships offered in 2014.

According to the Head of the School of Science and Technology, Professor Aron Murphy, such state-wide and national recognition is exceptional for any program, let alone one so new.

“We have had a strong cohort of students in Pharmacy over the past few years, which is both a credit to them and to the School’s teaching staff, as well as to the innovative design of the four-year degree.”

Professor Murphy also emphasised that the high quality of current students and graduates of Pharmacy from UNE derives in part from the embedded short courses in mental health and pharmaceuticals.

“UNE is one of the few universities to offer these short courses to students as a supplement to their Bachelor’s degree. We do so to ensure well-rounded graduates who are able to integrate their strong scientific training with practice-ready professional skills.”