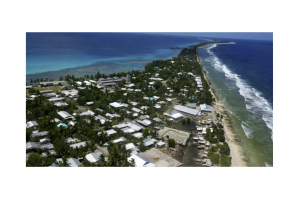 Research by the University of New England shows that more than $20 billion worth of infrastructure in the South Pacific is dangerously close to the coastline and could be at risk to rising sea-levels.

The research undertaken by Associate Professor Lalit Kumar and Dr Subhashni Taylor is published today in the journal, Nature Climate Change, and is the first study spanning Pacific island nations that considers the risks posed by climate change to existing infrastructure.

The study finds that 57% of buildings in the 12 South Pacific nations surveyed were within 500 metres of the coastline and almost half of these were less than 100 metres from the ocean.

“This puts these buildings in serious danger of rising sea levels, storm surges and other climate risks”, Dr Kumar said.

“We found that the most threatened of the small Pacific Countries were Kiribati, Marshall Islands and Tuvalu, which have over 65% of their buildings within 100 metres of the coastline.

“These countries’ economies rely heavily on tourism, hence why the buildings are located so close to the sea. However, with $20 billion of infrastructure potentially under threat from rising sea levels, a figure which dwarfs local GDPs, serious consideration needs to be given to future developments.”

Work is already underway by the team to include elevation data, which will gain greater insight into the climate risks confronting small island nations in the South Pacific, and continue assisting aid agencies and governments to devise suitable strategies for a changing climate in the region.