Published 02 June 2015
The University of New England is affording its students with opportunities far beyond the realm of normal University studies, sending its best and brightest as far afield as London to extend their …

The University of New England is affording its students with opportunities far beyond the realm of normal University studies, sending its best and brightest as far afield as London to extend their learning.

UNE Vice-Chancellor’s Scholar and Bachelor of Science student, Tim Richards, recently travelled to London and Oxford University to engage with some of the world’s most influential and preeminent researchers in early animal evolution.

With the exceptional support and assistance of UNE academic, Associate Professor John Paterson, Mr Richards utilised the $4000 from his UNE Vice-Chancellor’s Scholar Engagement Award to initiate an introduction into the International Palaeontology community.

Mr Richards was granted unlimited access to the fossil collection at the Natural History Museum in London where he was able to analyse and record specimens using state-of-the-art microscopes and photographic equipment.

“This is a rare privilege as the collection contains numerous irreplaceable and historically significant specimens and is usually off-limits to undergraduates,” Mr Richards said.

“Fossil highlights included some weird and wonderful, and as yet undescribed specimens from Chengjiang, China.

“I also had the opportunity to meet with award-winning author, Professor Richard Fortey, who graciously shared his vast knowledge and expertise on a range of topics from trilobite diversity and scientific writing techniques through to major events in the history of life, and I attended the 16th Young Systematists’ Forum.” 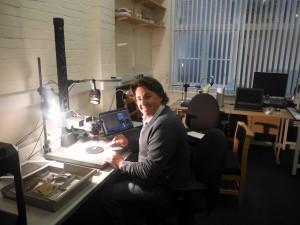 Mr Richards then travelled to the University of Oxford where he studied their extensive fossil collection at the Museum of Natural History.

“A definite highlight was the opportunity to replicate selected fossils utilising the museum’s 3D printer and to study Charles Darwin’s Australian insect collection.”

“The experience and professional relationships gained from this project will play a vital role in my research training and eventual career as a research scientist,” Mr Richards said.