Published 19 June 2015
The tiny sugar glider survives severe storms and strong winds by going into a deep torpor, similar to hibernation, according to new research by the University of New England. UNE’s Dr Julia Nowack …

The tiny sugar glider survives severe storms and strong winds by going into a deep torpor, similar to hibernation, according to new research by the University of New England. 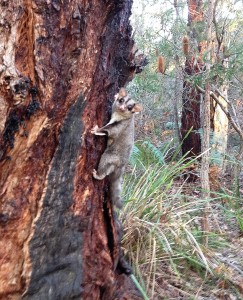 UNE’s Dr Julia Nowack and Professor of Zoology Fritz Geiser say the research provides the first data on activity and thermal biology of animals during a storm equivalent to a category 1 cyclone.

“Although animals disappear mysteriously during storms and re-appear after the storm has passed it is not known what they do during the storm to survive. We therefore studied sugar gliders in a subtropical habitat and found that during a cyclone they remain inactive, minimise activity and enter into deep torpor during which body temperature and energy need is reduced. All animals survived the storm and reverted to normal foraging activity the following night,” Dr Nowack said.

The sugar glider is particularly vulnerable to storms since gliding, its mode of locomotion, is impeded by high wind speed. Rain is also known to reduce the amount of nectar, which is one of the main food sources of sugar gliders besides insects and eucalyptus sap. So to survive the high rainfall and wind they limit foraging and enter torpor as a survival strategy.

Researchers trapped the sugar gliders and tagged them with radio trackers. They could then identify nest trees and measure body temperature. The gliders were monitored for up to 43 days.

“With climatic disasters increasingly affecting many parts of Australia and the world, we wanted to look at how animals responded to these challenges as there are few studies which show this.”

Dr Nowack says there are reports of sharks escaping to the open sea prior to hurricanes, elephants fleeing coastal regions during a tsunami or birds circumventing a tornadic storm but the behavior and physiology of animals during storms has never been quantified.

The research shows that heterothermic mammals able to enter torpor can outlast challenging weather events such as storms and floods by reducing metabolism and energetic needs and therefore have a crucial adaptive advantage over homeothermic animals that cannot enter energy saving modes.