Published 12 June 2015
A theatre history project at the University of New England that is investigating and making available some of Australia’s most significant plays for the first time, has received a $35,000 grant fro…

A theatre history project at the University of New England that is investigating and making available some of Australia’s most significant plays for the first time, has received a $35,000 grant from the Australian National Data Service.

The ANDS grant will fund the analysis, exposure and increase the discoverability of a set of manuscripts by a number of important Australian playwrights who were writing from the 1920’s to the mid 1950’s, including the playwright Louis Esson. 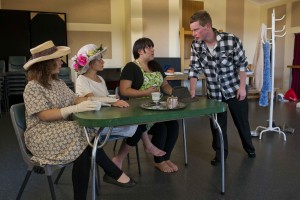 UNE’s Associate Professor Anne Pender will lead the project and says it is about preserving the material for future use.

“The body of plays in the Collection offers an invaluable picture of the development of Australian drama and theatre in a significant phase of its history. Many of the plays have been performed but never published and reveal a transformative period in Australian history, offering social comment on indigenous affairs, class, war and the ANZACs, politics, nationalism and much more.”

The Campbell Howard Collection of Australian Plays in Manuscript held in the Dixson Library at the University of New England contains 300 plays, theatre programmes, photographs, correspondence and research files.

“In addition to the ANDS grant, through the Dixson Library’s digitisation program and funding from a UNE seed grant the researchers are digitising the plays and making the Collection visible and available online. This will allow access for researchers in a variety of disciplines such as Literary Studies, Drama, History and Theatre and Performance Studies.

“The Collection was assembled by the late Campbell Howard who believed that the international success of Ray Lawler’s Summer of the Seventeenth Doll could not have sprung from a barren theatrical landscape. He began searching for manuscripts that had been performed by a reputable company or had been award winners in playwriting competitions.”