Published 04 May 2015
The University of New England’s School of Law is launching an appeal to raise funds for a prize in honour of former senior lecturer Bryan Pape, who made a lasting impact on Australian constitutiona… 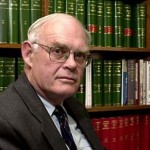 The University of New England’s School of Law is launching an appeal to raise funds for a prize in honour of former senior lecturer Bryan Pape, who made a lasting impact on Australian constitutional law when he challenged the Federal Government’s powers to spend taxpayer money.

In 2009, Bryan Pape became the first self-represented legal academic to argue a case before the Australian High Court in its 110-year history. His groundbreaking case led to a number of others, which have sought to bring the Commonwealth disbursement of money in line with its constitutional powers.

“Since Bryan’s passing, we have wanted to mark his distinctive contribution to the School of Law and his unique achievement in Pape v The Commissioner for Taxation,” Professor Stuckey said.

“Bryan also made a significant and lasting impact within the School of Law, including his instrumental role in the establishment of the School’s capstone unit in research, writing and advocacy, the moot court room, and the UNE AgLaw Centre, which is the only one of its kind in Australia.”

One of Australia’s leading constitutional lawyers, Professor George Williams from the University of New South Wales, said that while Australia has had many notable scholars in the field of constitutional law, few have had anything like the impact of Bryan Pape.

“He did so single-handedly, both by deciding in the first place to challenge the Rudd government’s stimulus payments in the High Court and then, as a litigant in person, by convincing every judge on that Court that, contrary to what was thought to be the position, strict limits applied to the capacity of the Commonwealth to spend taxpayers’ money.

“Pape may have lost his challenge to those payments, but in doing so he demolished the long held assumption that the Commonwealth can spend money in whatever area it wishes.”

The School of Law has approached leading figures in Australian constitutional law to support the establishment of The Bryan Pape Memorial Prize for Constitutional Law, which it hopes to first offer to UNE law students in 2016.