Birds and bats vital and valuable for natural pest control

Published 01 May 2015
The natural pest-control services provided by tiny bats and birds are potentially worth millions to the Australian cotton industry, according to a researcher from the University of New England. UNE… 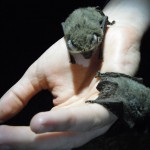 The natural pest-control services provided by tiny bats and birds are potentially worth millions to the Australian cotton industry, according to a researcher from the University of New England.

UNE PhD student, Heidi Kolkert, is researching the habits and diets of microbats and insectivorous birds with the aim of informing farmers of how best to harness this natural form of pest control.

Ms Kolkert’s research has shown that many small birds, including fairy-wrens, fantail-warblers and flycatchers, and several threatened species of bat, are voracious predators and can be very effective in controlling pest populations within valuable crops.

“Studies have shown that the invertebrate pest control service provided by microbats and birds in agricultural systems is worth billions of dollars to farmers worldwide every year,” Ms Kolkert said.

“Given that cotton is a such an important and lucrative industry in Australia, natural pest control performed by insectivorous birds and microbats is potentially worth a great deal, both in monetary value and to the environment.

“Obviously natural pest control is preferable to using chemicals, both for consumer health and the environment, but based on the data and evidence I collect, I want to inform farmers of the other benefits of encouraging bat and bird populations.

“In particular, I want to give these species an economic ‘value’ to landowners who are interested in embracing natural pest control.”

Ms Kolkert says that due to agricultural intensification and habitat destruction in many cropping areas, populations of bat and bird species are under pressure. Some are officially listed as threatened or endangered.

“To ensure healthy populations of these pest-eating species, it’s vital that patches of native vegetation are maintained in cropping areas.

“This leads to a win-win situation for farmers and the environment because not only does it encourage a free, natural way to control pests, it also preserves our threatened native species, provides shade for livestock, and results in wide-reaching environmental benefits.”

Ms Kolkert, whose research is being supervised by Professor Nick Reid, Dr Romina Rader and Dr Rhiannon Smith from UNE’s School of Environmental and Rural Science, expects to complete her PhD thesis in early 2017. For more information and updates on Ms Kolkert’s research, follow her twitter account: @birdandbatlife

Ms Kolkert is supported by an Australian Postgraduate Award and the Brigalow–Nandewar Biolinks Program, which is funded by the Australian Government’s Biodiversity Fund and administered jointly by the Northern Tablelands and North-West Local Land Services.