In 2013, UNE introduced the Vice-Chancellor’s Scholar program to recognise and reward academically high achieving undergraduate students. The program is 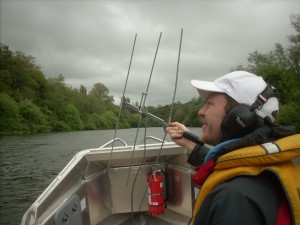 buoyed by the Vice-Chancellor’s Scholar Engagement Award and Academic Development Award which scholars are eligible to apply for. The Awards are designed to reward student’s outstanding academic performance and endeavour and encourage them engage with their discipline community in a variety of contexts.

As Luke can attest, receiving an Award gives students opportunities far beyond the realm of normal university studies, enabling them to participate in national and international academic programs.

Luke’s participation in fieldwork abroad saw him travel from Auckland to Hamilton to Christchurch and acquainted him with the behaviour and ecology of diverse species such as southern black-backed gulls, introduced mallard ducks, the great spotted kiwi and the tui, an endemic honeyeater.

Luke said the 8 weeks hands-on fieldwork gave him a greater awareness of the procedures and equipment used as well as difficulties and limitations researchers face in the field.

“Working with experienced and well-respected scientists on a variety of projects has provided insight into effective research methods and has enabled the development of a network of contacts that I may consult or collaborate with in the future.

“This is vital for my future career because it’s an extremely competitive area of biology, and being competitive both academically and in field research will hopefully set me apart from other students when applying for scholarships and fieldwork opportunities.”

Luke’s future plans include finishing his Bachelor of Zoology and then embarking on an honours project researching quolls. Ultimately he intends to work abroad conducting research in some of the world’s most beautiful and bio-diverse regions such as South America, Indonesia, India and Africa.