Published 06 March 2015
Waking up to a bloodied paddock strewn with the mutilated bodies of your livelihood is something every pastoralist dreads. But it is a costly reality in regional and rural areas with estimates that…

Waking up to a bloodied paddock strewn with the mutilated bodies of your livelihood is something every pastoralist dreads.

But it is a costly reality in regional and rural areas with estimates that wild dog attacks cost $24 million a year in lost revenue in the wool industry, $27 million a year in the beef industry and a further $1 million annually in the lamb industry.

Dr Greg Falzon, a Computational Scientist in the UNE School of Science and Technology, is working with industry to create a solution.

Dr Falzon recently won the prestigious Australian Wool Innovation award at the 2015 Science and Innovation Awards for Young People in Agriculture, Fisheries and Forestry held in Canberra this past week.

The award includes funding for Dr Falzon’s project the Electronic Shepherd, a surveillance and warning system which is being developed on the University of New England’s SMART Farm.

Dr Falzon said the Electronic Shepherd will monitor flock welfare using acoustic listening stations and additional sensors along with automated computer analysis to alert producers if there is a welfare issue with their stock.

“It is intended to complement the Wild Dog Alert System developed by me in collaboration with the Invasive Animals Cooperative Research Centre and the NSW Department of Primary Industries, which was showcased at last year’s National Wild Dog Action Plan launch.

“The Wild Dog Alert System monitors for the presence of dogs, particularly wild dogs on a farm whilst the Electronic Shepherd is designed to detect stock attacks which are either imminent or in progress,” Dr Falzon said.

Over the next 12 months, Dr Falzon will finalise a prototype Electronic Shepherd that will be field tested in the New England area. 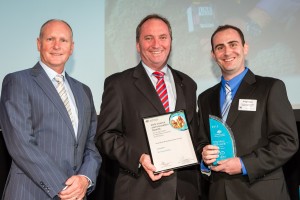