A rewarding day for UNE graduate

Published 23 March 2015
Saturday 28 March will be an exceptionally rewarding day for UNE graduand, Stephanie Shing-Kelly signalling the culmination of four years of hard work and persistence. Stephanie will graduat… 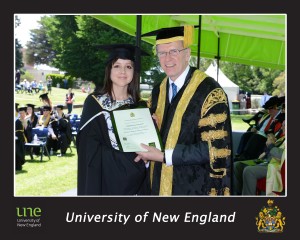 Stephanie Shing-Kelly receives her Bachelor of Historical Inquiry and Practice in 2014 from then Chancellor, the Honourable John Watkins

Saturday 28 March will be an exceptionally rewarding day for UNE graduand, Stephanie Shing-Kelly signalling the culmination of four years of hard work and persistence.

The University awards a University Medal to selected Bachelor with Honours graduates in recognition of outstanding academic achievement and excellence.

The Edgar H Booth Memorial Prize and Medal is awarded to the honours graduate who has the most distinguished academic record during enrolment at the University.

“I am truly honoured to be receiving such a prestigious award, and immensely pleased that all of the hard work over the past four years has paid off.

“I wanted to attend UNE primarily because the university was offering a brand new degree, the Bachelor of Historical Inquiry and Practice, which seemed perfectly suited to my interests,” says Stephanie.

Stephanie now works as a UNE Future Student Advisor and assists with teaching Medieval History and Latin in the School of Humanities.

Stephanie hopes to commence a PhD in History in 2016.