UNE researcher on expedition to understand the Earth

Published 30 January 2015
A researcher from the University of New England is departing on a sea expedition to learn more about our planet’s past, present and future by examining part of the Earth’s geological core. Dr. Alan…

A researcher from the University of New England is departing on a sea expedition to learn more about our planet’s past, present and future by examining part of the Earth’s geological core. 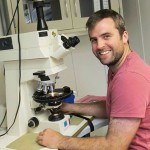 Dr. Alan Baxter, a lecturer in Earth Sciences at UNE’s School of Environmental and Rural Science, will join the JOIDES Resolution, a 140m long research vessel scheduled to depart Singapore this week on its first expedition of 2015.

The JOIDES Resolution will sail to the Bay of Bengal in the northern Indian Ocean where for two months it will drill to recover geological core from the Bengal Fan, a 22km-thick accumulation of sediments shed from the Himalayan Mountains. This expedition is part of a larger program of exploration in the oceans of the world, called the International Ocean Discovery Program (IODP).

The research expedition aims to obtain information on the formation and climate of the Himalayan Mountains during the last 55 million years.

“The objectives are to investigate interactions among the growth of the Himalaya and Tibet, the development of the Asian monsoon, and processes affecting the carbon cycle and global climate,” Dr. Baxter said.

“On board I will be studying the calcareous nannofossils that we recover from the core. These are marine algae that form ornate ‘shields’ called coccoliths and are more commonly recognised as the components of chalk deposits, such as those found in the Cliffs of Dover in England.

“By identifying the different species of nannofossil, we can tell when these sediments were deposited, which is very important when trying to work out the timing of major events, such as the uplift and erosion record of the Himalaya or the onset of the Asian Monsoon.”

The expedition will bring together 33 scientists from 11 countries on what is essentially a floating laboratory. They will each utilise their expertise to look at different components of the recovered sediments, including the type of sediments present, the physical properties of the rock, the chemistry of the core and the fossils it contains.

This work is supported by the University of New England, as a member of the Australia-New Zealand Consortium of IODP (ANZIC). Any schools interested in having a live tour of the ship, during Alan’s expedition can sign up here.

Find out more about Dr Baxter’s Earth Science Research Group in the School of Environmental and Rural Science at UNE.