Predicting when and where man-eating carnivores and humans meet

Published 21 January 2015
Scientists from The University of New England, The University of Queensland, and Australia Zoo, have developed a methodology to better predict when large aquatic carnivores such as crocodiles and s… 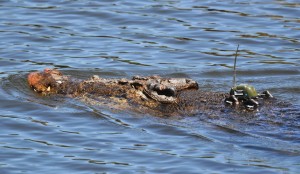 Scientists from The University of New England, The University of Queensland, and Australia Zoo, have developed a methodology to better predict when large aquatic carnivores such as crocodiles and sharks occur around areas frequented by humans.

The study looked at the estuarine crocodile Crocodylus porosus that has been responsible for 705-recorded human attacks world-wide over the last 20 years. Using underwater tracking technology, the movements of large crocodiles were followed over a 3 year period, throughout a river system in far north Queensland.

Project leader, UNE’s Dr Hamish Campbell recorded almost 270 instances over a 3 year period when large crocodiles moved through areas frequented by people engaging in water-based activities. Dr Campbell says humans and crocodiles were in the water at the same time and it is of interest that no attacks were recorded.

In fact, nearly all humans surveyed did not consider crocodiles to be present in the local area.

“This changes my preconception that a large crocodile will attack a human whenever the opportunity presented itself,” said Dr Campbell.

The study found that crocodiles increased their activity from September through to December as they search for mates and nesting sites. And it was because of this that a high number of crocodiles occurred in human-frequented shallow-water river crossing during these months.

Crocodiles also moved through the human–frequented areas between sun-down and sun-set and during periods of the high-tide.

“Most people understand that they should be wary of crocodiles after dark, but this study demonstrated that human exposure to crocodiles was also increased around the high-tide and between the months of September and December.”

The study results showed significant similarities between when and where crocodiles occurred, human activity and historical incidences of crocodile attacks with humans.

“The advantage of using our technique is that it creates an hour by hour probability of large-carnivore presence. People know the risks of entering the water in these areas, but do so anyway. Using our technique at least they can be better informed of the actual likelihood of a large carnivore being present.

Resource managers are already using similar technology to monitor white shark activity in Western Australia, and the techniques developed in this study could be easily adapted to other systems and species.”

The study has been published in the scientific journal Animal Conservation http://onlinelibrary.wiley.com/doi/10.1111/acv.12186/abstract?campaign=wolearlyview