Published 27 August 2014
A one-woman opera composed by Dr Eve Klein, Convenor of Music at the University of New England, was a finalist for Vocal Work of the Year at the APRA/Australian Music Centre 2014 Music Awards. Dr K… 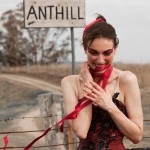 A one-woman opera composed by Dr Eve Klein, Convenor of Music at the University of New England, was a finalist for Vocal Work of the Year at the APRA/Australian Music Centre 2014 Music Awards.

Dr Klein’s opera, The Pomegranate Cycle, comprises of song, spoken word, concrete sounds, glitch, fragmented orchestration and layers of digital audio processing. In its album form it has already been downloaded over 35,000 times.

Dr Klein, who not only composed the opera but also performs it, said that The Pomegranate Cycle challenges the traditional depiction and role of women in repertory opera.

“Female opera singers are rarely given the chance to inhabit roles with a contemporary outlook, to perform roles composed by women, or indeed to claim authorship themselves through being involved in executive processes within the art-form such as composing, conducting or generating a work’s performance,” Dr Klein said.

The Art Music Awards ceremony took place on Tuesday 26 August at the Plaza Ballroom in Melbourne.

In a separate project, Dr Klein, who is also the Bachelor of Music Course Coordinator and a lecturer in music at UNE, has been awarded a New Work Grant from the Australian Council for the Arts Music Section to develop a music composition engaging with the New England community. The work will be written for The Australian Recorder Project, a duo founded by local recorder player Alana Blackburn and former Armidale resident Joanne Arnott to be premiered at the Vivid Festival in the Seymour Centre, Sydney in 2015. Alana Blackburn is also a University of New England music lecturer and a current PhD candidate within the School of Education.

The project, Codextant: Medieval Immersions in New England, is a fifteen-minute multichannel work drawing from the sonorities of the New England’s recorder history.

“This composition is important because it will help supply Australian repertoire for the recorder,” Dr Klein said.

“Iconic medieval music will inspire the orchestration of this work. For hundreds of years composers have chosen the recorder to depict aspects of nature, such as birdsong, love and pastoral themes. These themes will also be used to explore the link between the recorder’s widespread adoption in rural New England and the local sound environments.

“It also seeks to engage the New England community through the creation of the work by capturing recordings of local sound environments, and by recording oral histories from local artists, teachers and composers.”

Alana Blackburn said: “We’re so excited and proud to be able to work with Eve on such a wonderful project. Our aim is to promote new electro-acoustic works for the recorder, tying in the rich history the instrument has to offer. The news that the Australia Council for the Arts has acknowledged this through awarding Eve a New Work Grant to create a work for us and represent the New England Region, is a great achievement.”