Researching the key to survival for mammals of the Yucatan

Published 19 August 2014
In the jungle of the Yucatan Peninsula in Mexico there are no rivers or streams, yet the jungle is teeming with wildlife. Jaguars, ocelots, tapirs, monkeys and marsupials all inhabit the region and… 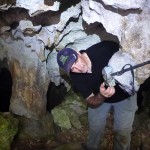 In the jungle of the Yucatan Peninsula in Mexico there are no rivers or streams, yet the jungle is teeming with wildlife. Jaguars, ocelots, tapirs, monkeys and marsupials all inhabit the region and use, as their sole source of fresh water, ancient subterranean sinkholes called ‘cenotes.’ Associate Professor Karl Vernes from the University of New England is undertaking research into these mysterious water sources and the habits of the animals that use them in a bid to conserve the unique ecosystems of a region which is facing the strains of mass development and tourism.

A/Professor Vernes has just returned from Mexico, where he has installed infrared sensor video cameras to capture footage of mammals as they enter caves to access the water pools. The footage recorded by these cameras will allow A/Professor Vernes to document how the cenotes are used by different species.

A/Professor Vernes’ research is being done in partnership with the Mexican grass-roots conservation organisation El Centro Investigador del Sistema Aquífero de Quintana Roo (CINDAQ), whose mission is to facilitate research, promote education, and support conservation of the natural and cultural resources associated with the cenotes and underground rivers of the region.

“We know that the cenotes are used primarily as a water source, but we have also early indications that certain animals may also be hunting within the cave systems,” A/Professor Vernes said.

“Our primary aim is to learn more about them in order to raise awareness of their importance to mammal species and the environment as a whole. We hope that by seeing footage of fascinating animals such as jaguars using the cenotes, people may change their views on development of hotels and roads.

“The Yucatan Peninsula is the famed location of many Mayan ruins, including Chichen Itza, as well as the popular resort city of Cancun. Tourism is a big deal, and while it would be unreasonable to expect that development stops altogether, it is possible to continue development with as little impact on the environment and the native mammal species as possible.”

The cenotes – taken from the Mayan word dzonot meaning ‘sacred well’ in ancient Mayan – are formed with the collapse of porous limestone rock. They were revered by the Maya who, like the animals of the region, relied on them for water and believed that some of their gods inhabited the caves. Many of the pools are connected to each other as part of elaborate underground systems and upsetting one cenote may end up affecting the whole chain.

To ensure the long-term viability of the project, CINDAQ hopes to enlist individuals and organisations to ‘adopt’ cameras in support of the project. The thick jungle and sweltering heat does not make it easy to reach many of these remote cenotes  so trained cave divers will be vital to the maintenance of the cameras installed by travelling underwater to retrieve data and to replace batteries. CINDAQ has harnessed a team of divers specially trained to explore and carry out work in these dark labyrinths.