Published 28 July 2014
On Friday August 1 one of the world’s leading experts into human rights in North Korea, former High Court Justice the Honourable Michael Kirby AC CMG, will present a public lecture on the subject a… 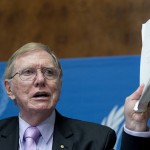 On Friday August 1 one of the world’s leading experts into human rights in North Korea, former High Court Justice the Honourable Michael Kirby AC CMG, will present a public lecture on the subject at the University of New England.

Mr Kirby has pursued an extraordinary career dedicated to justice, ethics and human rights, both in Australia and internationally. In March 2013, the United Nations Human Rights Council appointed Mr Kirby to chair a commission of inquiry into the alleged violations of human rights in North Korea.

Earlier this year, Mr Kirby presented the Commission’s report to the Human Rights Council at its 25th session, which concluded that systematic, widespread and gross human rights violations have been and are being committed by North Korea, its institutions and its officials. In many cases, the Commission found that the violations entailed crimes against humanity.

The Commission reported an astounding range of human rights violations including arbitrary detention, torture, executions, enforced disappearances, violations of the right to food, the right to freedom of thought, expression and religion, and discrimination on the basis of State-assigned social class, gender and disability.

The Commission’s report found that the gravity, scale and nature of North Korea’s violations revealed a State that ‘does not have any parallel in the contemporary world.’

Will human rights in North Korea change? This is the question that will be addressed by Mr Kirby, who as Chair of the Commission of Inquiry interviewed hundreds of witnesses and victims of the North Korean regime.

There are few people in the world more qualified to speak on the subject of human rights in North Korea than Michael Kirby, and UNE is honoured to be welcoming such a distinguished guest and friend of the University. Anyone with an interest in human rights, justice and international relations is strongly encouraged to attend.

Date and time : Friday, 1 August 2014 at 12:00pm-1:00pm
Location: School of Law, Lecture Theatre 1, Economics, Business and Law Building, Trevanna Rd, UNE
The lecture will be live-streamed on the website at the following link: http://www.une.edu.au/connect/livestream

The lecture will also be recorded and available soon after the event on the UNE web site.