Animalities: A Colloquium on Animals and Literature at UNE

Published 16 June 2014
Representations of animal treatment and suffering within literature will be explored in an international symposium on June 17 at the University of New England. 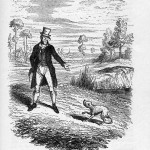 Representations of animal treatment and suffering within literature will be explored in an international symposium on June 17 at the University of New England.

The Posthuman Literary and Cultural Studies Group and the School of Arts will be hosting the event, which will feature two visiting scholars from the United Kingdom, Dr Robert McKay and Dr John Miller from the University of Sheffield. Also presenting at the colloquium is Dr Jennifer McDonell from UNE.

Co-organising the event is Dr Sascha Morrell from the School of Arts, who says it will be a privilege to see such distinguished scholars present on a range of interesting subjects.

“The three papers being presented each have a distinct literary focus,” Dr Morrell said.

“They will look at various animal studies methodologies and will be concerned with how nineteenth and twentieth century writers explore speciespolitics’.

“We are sure this will be a very interesting event for anyone interested in animals and how they are represented and treated in society.”

Dr Miller will be presenting a discussion on “Landscape Aesthetics and Animal Suffering in the Boy’s-Own Fur Trade,” particularly in relation to paradoxical depictions of animals in R.M Ballantyne’s tales of the Canadian transatlantic fur trade. On the one hand, animals form a recurrent ingredient of landscape aesthetics, while on the other hand, Ballantyne is consistently drawn to gory depictions of wounded or dying animals.

Dr Miller is the author of Empire and the Animal Body: Violence, Identity and Ecology in Victorian Adventure Fiction (2012), and co-author of the recently-published Walrus. He is currently working on Fur: A Literary History of Agony and Desire.

Dr McKay will be presenting “Everybody Knows”: Reading the Politics of Species in Michel Faber’s ‘Under the Skin,’ which looks at Faber’s work as a narrative of the political recognition of non-human species. Dr McKay has published widely on human-animal relations, and has worked with the British Animal Studies Group, including the co-authored book, Killing Animals (2006).

Dr McDonell’s paper, “Dangerous Dogs and the New Poor Law: Reading Dickens’s Bull’s- eye,”, argues that in Oliver Twist, Dickens was exploring the effect of environment on animals by transferring comparisons between people and animals into an agenda for social change. Dr McDonell has presented many papers at international conferences on animals and literature and has contributed articles and chapters to a number of international publications.

Dr Katherine Wright will give a reply addressing interdisciplinary contexts. Katherine Wright is a Postdoctoral Research Fellow in the School of Arts and has been awarded one of eight 3 year fellowships for her project: “Nourishing Culture and Developing Social Capital in a Community Garden”

The colloquium will take place on Tuesday June 17 from 2:00pm at the UNE Arts Lecture Theatre 3 in the Arts Building (E11).

The event is free and open to all. There will be an interval for refreshments and discussion, and a drinks reception will follow outside A3 Lecture Theatre the foyer of the E11 Arts Building.