Published 10 April 2014
The grainy black and white images linger in the memory, a strange long jawed creature confined to a cramped concrete cage. That old news reel footage is the final visual record we have of the last … 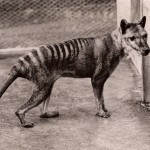 The grainy black and white images linger in the memory, a strange long jawed creature confined to a cramped concrete cage. That old news reel footage is the final visual record we have of the last Tasmanian tiger, who died in captivity at Hobart Zoo in 1936.

In the decades since, scientists have discovered much more about the reclusive Tasmanian tiger, which was part of a once diverse and wide-spread family of carnivorous marsupials called thylacinids that included at least 11 species. The smallest were the size of a domestic cat, the largest as big as a Rottweiler.

Experts from the University of New England and University of NSW have been researching one of these ancient cousins of the Tassie tiger, the Nimbacinus dicksoni, and evidence they have uncovered suggests Australia’s ancient carnivores were fierce, and able to kill prey much bigger than themselves.

Director of the UNE Function, Evolution and Anatomy Research laboratory, Associate Professor Stephen Wroe, says that they are gaining a better understanding of the thylacinid family thanks to a beautifully preserved skull found in the Riversleigh World Heritage Fossil Site in Northwest Queensland.

“While our understanding of thylacinid diversity has greatly improved with new fossil discoveries, our understanding of their ecology has remained limited, in part at least because most fossil species have been represented by very fragmentary remains. The well-preserved skull of the 25-15 million year old fox-sized Nimbacinus dicksoni from Queensland is giving us much needed insight.”

Dr Marie Attard from the research lab says despite its fearsome reputation, the Tasmanian tiger largely specialised in killing relatively small prey. Research conducted with sophisticated virtual 3D reconstruction techniques and computer modelling has shown that the Nimbacinus skull was closer to that of the ferocious spotted-tail quoll than that of the Tasmanian tiger.

“These findings suggest that, unlike its recently extinct relative, the skull of Nimbacinus was adapted to deliver a powerful bite, and that it likely hunted a wide range of prey, up to and likely exceeding its own body mass. Potential prey would have included birds, frogs, lizards and snakes, as well as a wide range of marsupials,” Dr Attard said.

Precisely why Nimbacinus and other fossil thylacinds became extinct is unclear, but an increasingly arid Australian climate from around 15 million years ago and competition from large dasyurid carnivores such as quolls and Tasmanian devils probably played an important part in their demise.

The research on Nimbacinus has been published in PLOS ONE and is available online from 9 April 2014.