Published 05 March 2014
Farming remains one of Australia’s most hazardous occupations with accidental death & suicide bearing a wave of grief across the hard, drought-stricken land. Just how rural families cope follow… 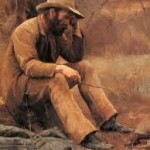 Farming remains one of Australia’s most hazardous occupations with accidental death & suicide bearing a wave of grief across the hard, drought-stricken land.

Just how rural families cope following an unexpected death from external causes is now being studied for the first time as part of a University of New England research project.

Doctoral student Alison Kennedy says despite improvements in farm safety, fatalities from quad bike accidents remain one of the leading causes of death for rural workers.

“It’s not just workplace accidents that make farming so dangerous, the additional stress created by the drought means suicide continues to be an ever present risk faced by farming families.”

“Grief isn’t a one size fits all emotion, sometimes the very resilience which is part and parcel of living on the land means  country people might express their grief in different ways and times.

“There is nothing wrong with grieving without tears, the problem comes when other people have an expectation about how and when someone should be grieving.”

Ms Kennedy says one of the indications evident in her research work so far is the clear gender divide when it comes to asking for help and support.

“Farming women generally have access to informal social networks where they can feel free to discuss their loss openly, men however rarely have social connections at that same level, meaning for many men, grief is something they have to deal with alone.”

After starting the research project in South West Victoria, Ms Kennedy will be examining the attitudes to grief and sudden loss when she speaks with farming families in the Hunter & New England areas.

Preliminary results from this project will be presented during UNE’s Minds Matter Conference at Coffs Harbour from 3-5 April 2014.