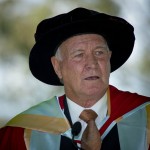 Former Member for New England, Tony Windsor, was conferred an Honorary Doctorate of Letters (Honoris Causa), by his old Alma Mater, The University of New England on Saturday March 22.

Mr Windsor was the occasional address speaker at Saturday’s graduation of more than 220 School of Law and Business School students at UNE, where he graduated in 1975 with a Bachelor of Economics.

UNE Vice-Chancellor Professor Jim Barber said it was a fitting and deserved honour for the distinguished alumnus of UNE and former Independent Federal Member for New England.

“Today’s conferral is fitting recognition of Mr Windsor’s longstanding association and support for UNE, as well as his work and outstanding political career within the wider New England region and at both State and Federal levels of the Australian Parliament,” Professor Barber said.

“Mr Windsor’s support for UNE has been long-standing and includes a range of UNE initiatives and major projects that link the work of the University to the wider community.

“Throughout his time as the State Member and later Federal Member of Parliament, Mr Windsor has demonstrated a passion for improving the quality of life and services to people in regional and remote areas, from health to telecommunications and learning.

“As the Federal Member for New England, he was instrumental in the lobbying of Government for funding to UNE, allowing for the development of the Tablelands Clinical School, which will deliver improved services to Armidale and greater training opportunities for UNE’s Rural Medical students.

“He has been strongly supportive of UNE’s strategic focus on research which is of particular significance to regional areas and increasing the availability of education to Australians in regional and remote areas, helping UNE build on its experience as a distance education provider.”

Mr Windsor was presented his Honorary Doctorate of Letters, during the graduation ceremony by UNE Chancellor The Hon. John Watkins.