Published 25 February 2014
On Monday 24 February, a welcoming reception was held at UNE for a delegation of Bhutanese visitors to Armidale. Mr Dorji Dhradhul and Ms Sonam Wangmo from the Bhutanese Department of Agricultural … 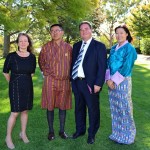 On Monday 24 February, a welcoming reception was held at UNE for a delegation of Bhutanese visitors to Armidale. Mr Dorji Dhradhul and Ms Sonam Wangmo from the Bhutanese Department of Agricultural Marketing and Cooperatives in the Ministry of Agriculture and Forests are here to workshop a model and framework for the establishment of a cooperative banking sector in Bhutan with experts from UNE and Armidale.

UNE has had a long-lasting, productive and collaborative relationship with Bhutan spanning some 60 years, with our initial links driven by UNE’s School of Education. Today, through the continued efforts of the School of Education, and more recently our School of Law, we are continuing to work together into capacity building with the Royal University of Bhutan.

There are also a many prominent Bhutanese UNE Alumni, including leaders in the Education Ministry who have completed their doctorates at UNE, many in the School of Education.

Included in the list of Bhutanese UNE Alumni is Dasho Pema Thinley (Vice Chancellor of the Royal University of Bhutan), who completed a double Masters in Education and Curriculum Studies with Honours at UNE. He was awarded an Honorary Doctorate in Education by the University in April 2004, only the second awarded to an overseas candidate.