Published 24 February 2014
The atrocities committed by Nazi doctors against concentration camp inmates, the disabled, and ethnic minorities during the Third Reich are relatively well documented. But much less is known about … 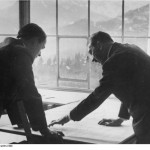 The atrocities committed by Nazi doctors against concentration camp inmates, the disabled, and ethnic minorities during the Third Reich are relatively well documented. But much less is known about the use of deliberate medical malpractice as a weapon against prominent Nazi officials.

Adjunct Professor at the University of New England, Randall Albury, will be giving a public seminar on this dark secret of Nazi Germany on Friday 28 February at UNE.

Professor Albury says that in the years following the Second World War, claims began to surface that both Adolf Hitler and Heinrich Himmler of SS infamy had ordered Nazi doctors to deliberately attempt to assassinate certain Nazi officials whom they wanted removed.

“Albert Speer, Hitler’s architect and later the Minister of Armaments and War Production for the Third Reich, alleged in his post-war memoirs that a doctor treating him in 1944 attempted to kill him on the orders of Himmler. But Speer is a dubious witness, since all of his post-war writings have an element of self-exculpation in them.

“It’s possible that his allegation about the attempted medical assassination may have been concocted to help distance himself from Himmler and the SS, for obvious reasons after the War. However, information does exist which seems to corroborate Speer’s account of the incident.”

Professor Albury and his research colleague and medical expert, Dr George Weisz, an Adjunct Senior Lecturer at UNE, have identified two other cases that may give weight to the truth of such malpractice.

“In our recent research Dr Weisz and I found evidence of two other instances of deliberate malpractice which actually caused or hastened the deaths of diplomat Ernst vom Rath in 1938 and SS General Reinhard Heydrich in 1942. Both men were prominent Nazi figures whose deaths had major political consequences.

“Although this is still work in progress, the evidence so far suggests that intentional malpractice may have been used on a regular basis as a way for the most senior Nazi leaders to achieve their political aims at the expense of officials who were ostensibly their party colleagues,” Professor Albury says.

Professor Albury is former Dean of the Faculty of Arts and former Pro Vice-Chancellor (Academic) at UNE, and is responsible for the historical side of research on this subject. Dr George Weisz has had many years of experience in medical practice as an orthopaedic surgeon, combined with an active interest in medical history, and provides the medical expertise for the joint project.

The seminar will take place at 9:30am-10:30am on Friday 28 February in Arts Lecture Theatre A3 in the UNE Arts Building. It will be followed by a morning tea. All are welcome.