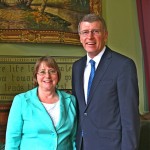 Professor Duncan will fill the role until the conclusion of the international search process and the appointment of the University’s next Vice-Chancellor, expected later this year.

The outgoing Vice-Chancellor, Professor Jim Barber will move into a strategic advisor role supporting Professor Duncan during this period.

The Chancellor, The Honourable John Watkins, said that the recruitment process for the next Vice-Chancellor would commence immediately.

The appointment of Professor Annabelle Duncan will commence on March 23, 2014 and will be for an interim period.

“Professor Duncan is widely respected and has a very safe pair of hands to guide the University through this interim period. We expect this to cover the next few months while we undergo a global search,” Chancellor Watkins said.

“I’m strongly committed to UNE and am very keen to continue to serve it in any way I can.  To be appointed as interim Vice-Chancellor is a rare privilege.  I also look forward to the recruitment process for the new Vice-Chancellor and I am very happy to the serve the University community in this interim capacity until that occurs.”