The shot heard around the world still echoes a century later

Published 28 January 2014
August 2014 will mark one hundred years since the First World War began. That war, known at the time as the Great War, turned the world upside down, scarred a generation of young men and women, and… 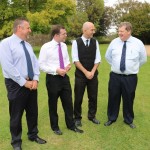 August 2014 will mark one hundred years since the First World War began. That war, known at the time as the Great War, turned the world upside down, scarred a generation of young men and women, and left a special stain of grief here in Australia – since immortalised as ‘a sound of gentle sobbing in the south’.

While more than 60,000 Australians were killed during that long terrible struggle, the Great War never lived up to its promise to be the ‘war to end all wars.’

In memory of Australian experiences, both on the front and for those left at home, the University of New England is playing a lead role in commemorating regional experiences during the war.

UNE is leading the coordination of a series of local activities to take place this year. Centerpiece activities will include the Regional Australia at War public conference, and the Booloominbah Red Cross Convalescent Home public exhibit.

Both of these events will be hosted by UNE during New England History Week, which will run from 11-17 August to coincide with the centenary of both the start of recruitment for the Australian Imperial Force, and the launch of the Australian Red Cross.

Dr Nathan Wise, Lecturer in Public and Applied History at the University of New England says New England History Week has been designed to include and engage the whole local community.

“We invite and encourage individuals, educational institutions, businesses, organisations, and groups from across the New England region to contribute by creating local historically-themed activities during this week.

The University of New England will be coordinating community activities through our Frontline: New England website, to be launched in early February 2014. The website will provide information on local commemorative events as well as detailing how people can contribute their own family’s history to join the broader community story.

UNE will also work towards preservation of important documents and images, offering scanning and archiving of family items such as letters and photographs.

Dr Wise says few families from this region were spared from the effects of the Great War, a legacy many families still bear. Bringing the whole community together to commemorate the centenary reflects the community spirit back then that still exists today.