External students in Armidale to study the Actor’s Craft

Published 21 January 2014
A group of 22 drama students have spent eleven days exploring theatre and expressing their creativity as part of an intensive acting school at the University of New England. The students, all of wh… 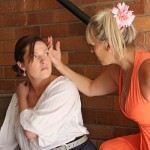 A group of 22 drama students have spent eleven days exploring theatre and expressing their creativity as part of an intensive acting school at the University of New England.

The students, all of whom study by distance education at UNE, travelled to Armidale for ‘The Actor’s Craft’ Intensive School, which is coordinated by esteemed lecturer in theatre studies, Sue Fell.

The intensive school allowed students to complete the practical requirements for their acting unit, ‘The Actor’s Craft’, which culminated in a major performance on Friday evening.

Course Co-ordinator of the Bachelor of Theatre and Performance and Master of Applied Theatre Studies, Dr Julie Shearer, said the unit allows students to explore a wide range of acting techniques.

“It covers the most significant and influential approaches to actor training, from the Russian influences, such as Stanislavski to the more playful French trainers, such as Lecoq. They also study English and American directors and actors who have put forward different theories and approaches to actor training,” Dr Shearer said. “We explore these ideas through exercises and training, working on the body, the voice and text.

“This is our longest intensive school, and many of the students have been staying together, which gives it a very communal vibe.

For some of the students, the intensive school was their first experience of Armidale and the UNE campus. Students who regularly study on-campus will complete the same assessment requirements over the usual span of Trimester 1, 2014.

For the final performance, each of the students was required to take part in a scene from Anton Chekhov’s Three Sisters, as well as a monodrama based on twelve lines from a novel of their choice. Austen’s Pride and Prejudice, Tolkein’s The Hobbit, and Douglas Adams’ Hitchhikers Guide to the Galaxy were amongst the choices for the monodrama performances.

Jennifer Power-Geary, who is going into her second year of a Bachelor of Theatre and Performance and hopes to move into education, travelled from Grafton for the eleven days of the school.

“This has been the best experience of my acting career,” Ms Power-Geary said. “I have probably learnt more here than I have anywhere before.”

Lachlan Glasby from Murwillumbah, who is studying to be a teacher and has previously been involved in youth theatre, described the intensive school as amazing and, as the name suggests, “intense.”

The intensive school is one of a number of on-campus programs that take place at UNE over the regular university breaks, giving students who would otherwise study entirely by distance the chance to see Armidale and live the on-campus university experience.