Published 15 December 2013
A University of New England student has been deep in the Kimberley studying rare rock wallabies in an effort understand more about their population and elusive habits. UNE Honours student Stephanie… 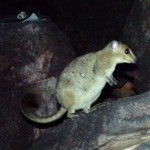 A University of New England student has been deep in the Kimberley studying rare rock wallabies in an effort understand more about their population and elusive habits.

Monjon are listed as “near-threatened” and are thought to be in decline, and the Nabarlek are considered “data deficient.”

Stephanie says both species inhabit steep, rocky outcrops and escarpments across the vast Eastern and Northern Kimberley, sheltering from the intense sun in crevices and caves.

“For my honours project, I’m developing a new technique to identify each individual wallaby by the DNA found in their scats, which can be difficult because they are very similar in size and appearance.”

She says access to their habitats is difficult as there are very few roads in the area.

Researchers accessed many of the survey sites by helicopter, being dropped off on rocky peaks in areas that have never before been surveyed for these animals.

“We spent weeks scaling rock faces and walking cliff lines, searching for evidence of the rock-wallabies. In particular, we spent a lot of time looking for their scats. Sensor cameras were also set up to capture images of the wallabies.”

Stephanie Todd says scientific knowledge on these species, like many others in the Kimberley, is pretty scarce.  This wide scale project aims to improve out-dated distribution data by locating and recording evidence of populations across a large sweep of the region and to develop a baseline for future survey work.

The survey results will be useful for planning and management of Indigenous Protected Areas, as well as for informing state and national government management plans for threatened species.

Stephanie’s research is being supervised by Associate Professor Karl Vernes from UNE’s School of Environmental and Rural Science and Dr Mark Eldridge from the Australian Museum. The project was funded by Rangelands NRM Coordinating Group and WWF-Australia, and supported by the Kimberley Land Council Ranger Program, Dambimangari Aboriginal Corporation and Wunambal Gaambera Aboriginal Corporation.