Published 05 December 2013
The University of New England has hit the ‘On Switch’ to fire up a very cool and informative new toy: an ‘Organic Motion System’ which allows human movement to be tracked in its most natural state.… 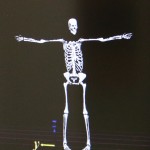 The University of New England has hit the ‘On Switch’ to fire up a very cool and informative new toy: an ‘Organic Motion System’ which allows human movement to be tracked in its most natural state.

UNE’s Organic Motion System, one of only three in Australia, uses a new form of advanced “markerless” motion capture technology.

This sophisticated new technology allows a person’s movements to be carefully observed and analysed through digitally recreating movements on a high-powered computer.

Unlike previous technology, the person being studied does not have to wear a suit with markers attached to their body for their motion to be captured.

Dr Kath Shorter from UNE’s School of Science and Technology says how the machine might be used will only be limited by researcher’s imagination.

“Whether we are looking at certain sporting movements or analysing someone’s gait, Organic Motion can actually follow and track that movement.

“It’s also really useful in studying children, because they can play normally, while we analyse their movement without them actually being aware that we are doing so.”

The Organic Motion Machine places the subject in a specially constructed space, while multiple cameras record every body movement in real time, producing an animated version of the person which is saved for further analysis.

Dr Shorter says “as soon as some walks into the organic motion machine we can already be recording their motion and coming out with meaningful data. With other systems, the researcher often has to spend hours or even days processing data”.

The Organic Motion Machine will be useful across a whole range of disciplines at UNE, including exercise and sport science, sports performance evaluation, health sciences, medicine and even psychology.