Rangelands forced back in time by climate change

Published 03 November 2013
A relatively small change in soil nutrient levels over the next one hundred years could have adverse implications for the dry arid rangelands which cover around 70% of Australia. A report, publishe… 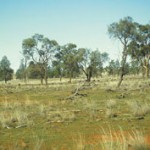 A relatively small change in soil nutrient levels over the next one hundred years could have adverse implications for the dry arid rangelands which cover around 70% of Australia.

A report, published in the latest edition of Nature, co-authored by Dr Matt Tighe (pronounced Tie) has found that this huge area of our island continent may be profoundly altered by the impact of climate change.

Dr Tighe says around 38% of the world’s human population rely on semi-arid, arid and dry sub-humid environments, with the vast majority of Australia falling into this category.

“This worldwide study across 6 continents has been collecting information from test sites in 16 countries including UNE’s research locations near Nyngan in NSW and Cobar has found that as systems became more arid, carbon and nitrogen levels were reduced, while phosphorus levels in the soil increased.

“The study is the first to examine this type of effect at a global scale, and suggests that nutrient cycling in the largest terrestrial community of the world will be ‘unbalanced’ by the suggested changes in climate over the next 100 years, affecting both natural and production systems.”

Dr Tighe says it is hard to predict exactly what changes this will have on the agricultural production capacity of these areas.

“A rapidly expanding world population means farmers and graziers are under continual pressure to grow more and more from the limited supply of land available for agriculture. This research reveals that these changes to our landscape could mean many of the farming practices now used to gain maximum productivity from the land may no longer provide the same results.

“As soil carbon levels decline, the earth’s soil will tend to revert to resemble simpler ecological systems. Essentially climate change will cause the soil to ‘reset’ to a system that has less complex biological interactions.”

Dr Tighe says these research results follow UNE’s partnership in a global collaborative network of researchers, who have been examining dryland systems for several years.