Published 18 October 2013
UNE’s Enactus Team, who took out the title of Australian Champions in July, have now returned from the Enactus World Cup in Cancun, Mexico. Enactus is an international non-profit organisation that … 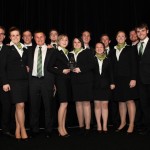 UNE’s Enactus Team, who took out the title of Australian Champions in July, have now returned from the Enactus World Cup in Cancun, Mexico.

Enactus is an international non-profit organisation that brings together some of the brightest students, academics and business leaders from around the world to show how the power of entrepreneurial action can transform lives and shape a better, more sustainable world.

This year’s World Cup brought together thirty-six teams from around the world, who had qualified from a field of 1,600 universities. Each team presented projects, developed in the spirit of entrepreneurialism, that address societal needs and create opportunities in communities.

The UNE Team presented three projects at the World Cup that had previously taken them to victory and claim the National Championship in Australia.

UNE faced strong competition in Mexico, vying against Puerto Rico, Germany and Ghana in their opening round.

Enactus UNE President, Rachel Price, said despite not progressing to the semis, the team’s experience was an extraordinary one. “The whole thing was just mind-blowing, it’s extremely competitive, yet the whole thing was very inspiring. That’s the nature of Enactus – the teams involved do really amazing things,” Rachel Price said.

Projects presented by the UNE Team addressed issues that are very relevant to the New England region. The Minimbah Project seeks to ensure that all Australians are provided with a birth certificate automatically and free of charge. The team found that many indigenous Australians are living without a birth certificate, leaving them in the difficult situation of not being able to open a bank account or apply for a licence or passport.

The Team also worked on FinLit, which aims to improve financial literacy amongst young indigenous students, and Farming Futures which addresses the looming food shortages of the future by improving graduate employment opportunities in the rural sector.

Enactus UNE is open to all students to join, and Rachel stresses that the benefits it gives to members are significant. “Enactus helps to build confidence and produce well-rounded, work-ready graduates. We met CEOs and executives from major international companies who are always interested in recruiting Enactus students.”

The team’s participation in Mexico was made possible through the support they received from many outlets at UNE, including the School of Law, the UNE Business School, the School of Environmental and Rural Science, the School of Behavioural, Cognitive and Social Sciences and the School of Education, the SAF Funding, the Deputy Vice-Chancellor and the Vice-Chancellor. The time and effort put in by the team mentors and the Business Advisory Board has also been of great value to the team.

The Enactus Team are now back hard at work on developing some new projects for next year, and will have their eyes firmly focused on next year’s World Cup, to be held in China.