UNE to receive Keys to the City

Published 14 October 2013
On Friday October 18, the City of Armidale and the University of New England will come together to celebrate a number of milestones in their shared history. 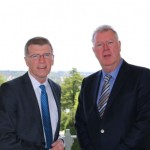 On Friday October 18, the City of Armidale and the University of New England will come together to celebrate a number of milestones in their shared history.

In the year of its 75th anniversary celebrations, which coincides with the City of Armidale’s 150th anniversary, UNE will be given the honour of being the first educational institution to receive the ‘keys to the city.’

This is a symbolic honour, tracing back to medieval times when cities literally had gates that were guarded during the day and locked by key at night. The keys to the city were given only to those regarded as trusted friends of city residents, as they were allowed to enter and leave the city at will.

The Chancellor of UNE, the Hon. John Watkins, will receive the keys along with Vice-Chancellor, Professor Jim Barber.

“This is an event of great significance for UNE,” Mr Watkins said.  “It will be an honour to be part of a celebration that symbolises the longevity of comradeship between the University and the City of Armidale.”

In his first major event as Mayor of the Armidale Dumaresq Council, Laurie Bishop (pictured here with Chancellor Watkins) will present the ceremonial keys to the University.

“The keys to the city are being given in recognition of the importance of the close relationship between Armidale and the University of New England,” Mr Bishop said. “I hope this will herald a new era of even closer cooperation and collaboration between the City of Armidale and UNE.”

The celebrations will kick off with a procession that will make its way from St Mary’s Cathedral to the Beardy Street Mall, where the presentation of the keys will take place.

UNE academic staff and graduates will be in full academic dress, and will be joined by Armidale Dumaresq Councillors as well as UNE professional staff, Senior Executive and Council. Providing the music and ceremony for the procession will be the Armidale City Band and the TAS Cadets Guard of Honour. Member for the Northern Tablelands, Adam Marshall MP, will also be attending the event.

Armidale primary school students have been invited to join in the processions and celebrations, and community members are encouraged to come along and enjoy the day.

Those taking part are invited to gather in Central Park at 2pm on Friday October 18. The procession will commence at 2:15pm from the Cathedral, with the presentation of the keys to the city at 3pm at a stage area on Beardy Street Mall.

Due to road closures, parking may be affected in Dangar Street at this time. Bus zones have been set up on the corner of Barney and Dangar Streets, opposite Smith House for drop off, and beside the Old Court House in Faulkner Street for the return trip.