Published 10 September 2013
Emeritus Professor and former Chair of UNE Geography and Planning, Jim Walmsley, has received one of the most prestigious awards in national geography, the Griffith Taylor Medal. Named after Austra… 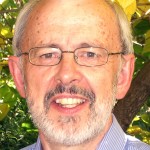 Emeritus Professor and former Chair of UNE Geography and Planning, Jim Walmsley, has received one of the most prestigious awards in national geography, the Griffith Taylor Medal. Named after Australia’s first Professor of Geography, the Griffith Taylor Medal is awarded by the Institute of Australian Geographers bi-annually to an individual who has made a distinguished contribution to geography in Australia.

Jim Walmsley, who taught and researched in the former Department of Geography and Planning at UNE for almost forty years, was awarded the medal in recognition of his international renown as a researcher, his innovative and passionate teaching of the discipline, and for his leadership of the Institute of Australian Geographers, which he chaired from 2006-2008.

Nationally and internationally renowned for his research in the field of behavioural geography, Jim has published 20 books and 108 book chapters and journal articles, mainly on the related topics of migration, tourism, leisure and recreation, and regional and urban development. The outstanding character of his research led to his election to a Fellowship of the Academy of the Social Sciences in Australia in 1994 and, in the same year, election as a Fellow of the Royal Geographic Society.

During his presidency of the Institute of Australian Geographers, Jim played a pivotal role in successfully negotiating with the then Federal Government to have geography included in the new Australian curriculum. Jim’s name is also synonymous with geography at the University of New England where he began his academic career in 1972. He served with distinction as Chair of Geography and Planning from 1993 and later in 1996 was joint winner of the inaugural Vice-Chancellor’s Award for Excellence in Team Teaching with long-standing colleague Prof. John Humphreys.

In receiving the Griffith Taylor Medal for 2013, Jim fittingly joins an elite group who have played major roles in shaping the teaching, research and leadership of geography nationally and internationally.